I think of it as a romance novel! But you could equally say it’s a spy novel, or a murder mystery, or a WW2 novel, or that it’s about the death of empire and the inevitability of history. You know, fun stuff. Or you could say, as Cory Doctorow very astutely pointed out, that it’s about slightly shit superheroes.

What inspired you to write the novel?

I want to say money but… Ha! No, I got interested in the idea of, you know, how these very… trashy? superhero fantasies emerged from the very real shadow of WW2 and the Holocaust, how they were written in the war years, by these young Jewish kids, really, in America, as the war goes on. And how that image, which is a very enduring image, how it evolved over the 20th and 21st centuries, and in a way, I think, moved away from that, kind of mutated into something else. So I wanted to give it a very serious treatment, if that makes sense – how the garish colours and so on inform this very dark, grey history. I don’t know. It was a giant pain to write, if I’m being honest! Some books write easy, some books write hard. But I like it a lot. Other people seemed to like it too. I know they teach it on one masters course in creative writing, if you can believe it!

Where do you draw your inspiration from in general?

Whatever makes me angriest, really. I think good writers, like good stand-up comedians, transmute rage and despair into art. But you’ve still got to have the fart jokes. 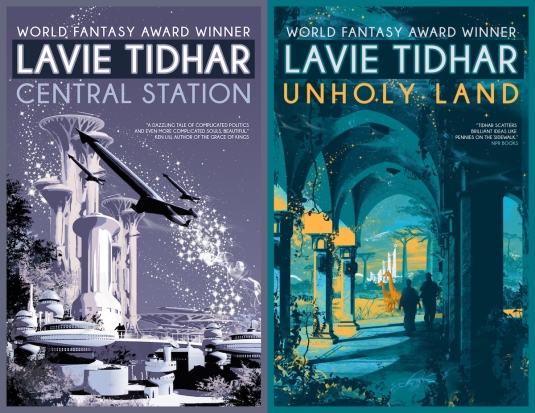 I read a lot of translated American science fiction growing up on a kibbutz in Israel. There was something very liberating about SF, a genre that always felt to me to be very counter-cultural, very rebellious. I guess that appealed to me! I was never very good at following the expected conventions.

Not really… just, you know, sitting down and trying to write. That’s literally the job, as it were.

I think I knew I wanted to be one from an early age, I just didn’t really know how you do it or what you write about. I got into poetry later (my first book, actually!) and travelling (so I’d ideally have something to write about!), and then at some point I just sat down and started writing stories seriously, and never stopped. Now I kind of wish I could but it’s probably too late!

It seems in rude good health! You know, Ray Palmer (who edited Amazing Stories for a while, and was behind much of the UFO craze in the 50s as well – fascinating guy), he once made the observation that SF completely reinvents itself every twenty years or so. Which is why it survives, but also why you get the generational wars in it – something that goes back to the very beginning! I’m fascinated by the history of SF, to the extent that my next – possibly my next – published novel, The Circumference of the World, also from Tachyon, is a lot about that.

Anyway I’ve been lucky that my work is, it’s kind of weird, it kind of falls in between genres, it’s not really one thing or another, but mostly it’s found a home with genre readers, maybe, who are more tolerant of you being a bit weird. So I’m always kind of there, on the periphery.

I just finished this really big book, we’ll see what happens with it. My next novels are The Circumference of the World, which is sort of about science fiction, and the nature of the universe, and God; and the next one published after that might be the really weird one about clowns.

Researching these weird Nazi pseudo-scientists for something (you know, they were into Atlantis and all that stuff), not really reading much at the moment otherwise, though I really enjoyed Zen Cho’s The True Queen recently, which I got to read before its publication.

You want me to say The Violent Century, right? Ha! Or did you mean someone else’s book… Fine. My friend Shimon Adaf’s Kfor, which I think is a masterpiece. It’s only available in Hebrew though.

How would I know!

Lavie Tidhar’s The Violent Century is published by Tachyon Publications in North America in July 2019; it is out now in the UK, published by Hodder.