Let’s start with an introduction: Who is Chris Humphreys?

Gosh, start with an easy one! I was hoping you could tell me!

Chris is an actor and author who was born with a sword in his hand — which must have made it painful for dear old ma. He became an actor so he could leap around with bladed weaponry — and largely succeeded. (I was even Graham Ashe the Immortal in Highlander, though I was dead after ten minutes which seems a swizz!). He became a writer with much the same ambitions, though he also became interested in myth and magic and playing Hamlet at a formative age shook things up philosophy-wise. (Who also dies from a sword cut, of course!) His body is Canadian, his mind is English, and his heart is Norwegian. He has a familiar called Dickon who claims to be a cat, and he writes in a cedar octagon in a forest on an island in the Salish Sea.

Your new novel, Smoke in the Glass, was published this week by Gollancz. It looks really interesting: How would you introduce it to a potential reader? Is it part of a series?

Glad you think so. Yes, it is Book One of the Immortals’ Blood Trilogy. The story began for me, in that cedar octagon, with a question: If you had the choice, would you want to live forever?

And then, these characters answered it, asking to be written into my book, thus:

Ferros wouldn’t. He had his life as a soldier of the Empire of Corinthium, he had his love. But when he is killed fighting desert raiders and is immediately reborn, that life is over. Now he must train in the ways of the decadent immortal elites — and learn how to rule all those resentful, time-cursed mortals.

Far in the west, on the volcanic island of Ometepe, Atisha doesn’t have that choice. She is not immortal. But the man she loves — Intitepe, the King-god — is. The only one — for he has killed all the others. Yet an ancient curse says that just as he killed his own father, a son of his will one day kill him. So if any in his harem get pregnant, and the child is male, that child is swum in the great volcano’s lava. Atisha plans to fight, to die, for her baby. But when it is born, she doesn’t have to — for it is neither boy nor girl. And Intitepe makes his first mistake in five hundred years: he sends mother and child away to await ‘developments’.

In the frozen north, Luck never had a choice. He discovered immortality when he died as a sickly child — and was reborn a god. With his humped back and short right leg, he always thought his parents’ name for him a joke. For in Midgarth, only a warrior-god is prized, living for the glory of battle: to fight, kill or die, and be ever reborn. Yet Luck has other gifts — to read the signs of the world. And he has realized something…

Someone is killing the gods.

Corinthium. Midgarth. Ometepe. Each world knows nothing of the other. But there is a fourth world, beyond the unclimable mountains and unsailable seas. A vast land where four savage tribes have united under the prophecy of ‘the One’.

A child who is neither boy nor girl.

When the tribes find ‘the One’, they will climb unclimable mountains, sail unsailable seas… and conquer the wide world.

Unless a broken soldier, a desperate mother and a crippled god can stop them.

Once I ask myself a question like the one above, I am inspired to create characters who will answer it for me. To do that, they must tackle all the obstacles I throw in their way. It is like a giant jigsaw puzzle. Some pieces are obvious, some are really hard to find — some have been eaten by the cat! When I get to the end of one journey, another begins — I have broken away from writing Book Two, The Coming of the Dark to answer these questions.

My inspiration comes from all over. I love history — I have written eleven novels of historical fiction as C. C. Humphreys. But I also love myth and legend. I try to find out where those amazing stories sit within me — and then rephrase them in my own way, through character. As an actor, I know that character is king, and the more varied and seeking they are the better.

Trolls. My mother, the Norwegian, read me the amazing Norwegian fairy stories when I was a child. They were also terrifying. When I could read for myself, I chose tales and the more adventurous the better. Loved stories of Vikings and musketeers. Also loved the Narnia books of C S Lewis. They were my intro to fantasy.

Hmm. It’s a tricky question. I love writing. Love that I am still being paid to make up stories. But the publishing business has gotten harder and harder to earn a living within. Advances have dropped — quartered really since ten years ago. Foreign sales are much harder to get. The people who work in the industry are nearly always enthused, delightful people. They are on fixed salaries though while authors… well, each time you publish it feels like you are rolling dice at a craps table. It’s a buzz. But there are sleepless nights as you worry about the mortgage.

Sure do. I write a book a year essentially, and that requires me being at my desk every morning… for about 8 months of the year. I try to simplify everything — I don’t outline very much initially, because I like my characters to tell me their story. I teach writing workshops sometimes — and my favourite one is called “The Mountain — Writing the novel as a series of ascents”. So I separate out the process — the first climb is a free one, with me telling myself the story, scrambling up the mountain, not entirely sure where I am going. When I reach the top, I look down, gasp — then figure out a better route – on the second draft, one someone else could follow — i.e. my editor. The third ascent is the third draft: I harness with a smart fellow climber — my editor, who guides me to the optimum final route.

I always wanted to tell my own stories, but like so many, fear held me back: how could I ever be close to as good as my heroes? Then, in 1992, I was living in Vancouver and entered a 24 hour playwriting competition. You literally went into a room at 530 on a Friday night with two pages of notes and came out at 530 on Saturday with a play. My sole ambition was to finish something. (I had so many half started ideas, abandoned because I didn’t understand process). I not only finished — I won! They gave me 500 bucks and put on my play. I was a professional writer. I wrote two more plays — but what I truly wanted was to write a novel, of the kind I’d loved growing up — wild, and with swords! I had the idea for The French Executioner but it took me six years to get around to writing it, because fear held me back. Then I wrote it really fast, and sold it really fast, and lo, I was a novelist. I can’t quite believe that, nineteen years later, Smoke in the Glass is novel no. 17! I am still so fond of that first novel. People still love it — it’s quite mad. It’s also been optioned for film, twice.

Fantasy thrives, I think, because people love to escape our present worrying realities, into something that truly takes you far away. The variety is thrilling from the more traditional Tolkienesque to the grim-dark of an Abercrombie. I believe — hope! — that the Immortal’s Blood trilogy is somewhat different again. There’s nary an elf maiden in sight, no lost kings, no magic swords. There’s a world that’s tilted toward a tiny elite who control everything because they happen to be immortal. So though the world is fantastical, there’s a relevance to today, where so much threatens us. Yet the keys for me are always character and thrills — how can these people negotiate their place in a world that is falling apart? That has a massive external threat to their whole way of life? So I hope that people will see this as fantasy but with a realistic, modern edge.

Always. As I said, I am a fair way into Book Two of Immortals’ Blood, Great to be back tormenting those characters! But I also wrote something quite different afterwards — a modern London noir. Can’t say too much about it, but I am very excited.

Right now? I made this extraordinary discovery last year — I started to read Daphne du Maurier. She wrote from the 1930s to the 1970s and is startlingly, breathtakingly modern, in style and subject. I can’t think of a writer who does dread quite like her. (Think of Rebecca, Don’t Look Now, The Birds.) I am reading My Cousin Rachel at the moment. I like contemporary fantasy, like Joe Abercrombie and Neil Gaiman. But to go back to the classics and find them so ‘now’? Its great. 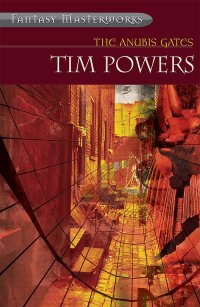 Gosh. I always struggle with questions like this! There are so many, in the fantasy genre and others. And there are different books appropriate for different ages. But I suppose as this is a fantasy interview… the book that expanded how I thought about the genre, blending as it did historical elements with magic, horror and fantasy was The Anubis Gates by Tim Powers.

I can hang eleven teaspoons on my face.

I am very excited about attending my first WorldCon. It’s in Dublin, August 15-18. I am looking forward to being with fellow acolytes of the genre, seeing the costumes, participating in workshops — and drinking much Guinness!

Chris Humphreys‘s Smoke in the Glass is out now, published by Gollancz in the UK. The author’s historical fiction is published in the UK by Orion.