Welcome back to Civilian Reader! Let’s kick things off with your latest novel, Soulkeeper, which is published by Orbit. It sounds really cool: How would you introduce it to a potential reader? Is it part of a series?

It’s part of a brand new series, The Keepers, and it’s focused on a world where magical creatures, monsters, and the dragons who created them reawaken after centuries of imprisonment to discover humanity having spread across the entire continent. Some are eager to get along. Most are not. And a few are just hungry.

What inspired this novel and series?

To be completely honest: hours and hours of playing the videogame Bloodborne, and the chorus from the song “The Swollen Goat” by Clutch. Seriously. (Those lyrics are, btw, “Bury your treasure, burn your crops, black water rising and it ain’t gonna stop.”) The transition into a world of magic is heralded by a wave of black water across the land, and the results are, in places, a gothic nightmare reminiscent of the phenomenal city of Yharnam in Bloodborne. 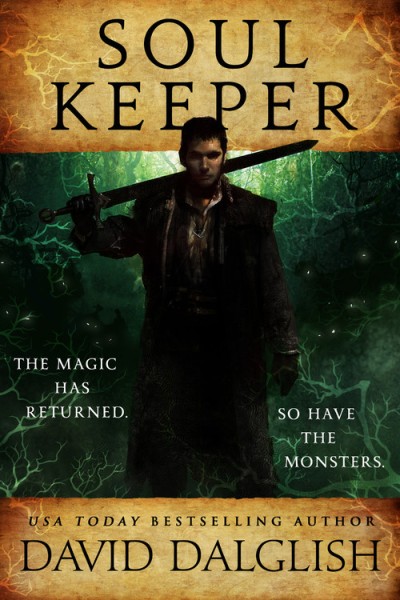 You’ve been writing and publishing for quite some time, now: Any lessons learned along the way? Anything you’d like to share with aspiring writers?

Read widely. Seek out books beyond your comfort zones. The current landscape of SF&F is evolving before our eyes, and in such wonderful ways, it’d be a shame for anyone to miss out, or for authors to deny themselves such new inspirations.

Generally I write out the overall plot to a book on notebook paper in very generic terms, with the page covered with lines and arrows showing connections and when events take place in reference to one another. After that, when I’m going to actually write the story, I try to go chapter by chapter writing a brief single paragraph summary, detailing who the POV character is, and what will happen in said chapter. This helps me keep track of pacing, various significant events, and ensure I don’t drop a story thread out of nowhere.

At least on the Orbit side of things, there’s a lot more books coming out willing to fully embrace the sillier, weirder, and more fantastical elements of Fantasy without any sense of shame or attempt to appear ‘mature’. When I was growing up, a lot of fantasy novels were trying hard to be taken seriously, and to distance themselves from more traditional Dungeons and Dragons offerings. Now? Undead hordes lead by liches riding dragons are assaulting barbarians on HBO. I think it’s clear readers crave the actual ‘fantastical’ elements of fantasy.

I just submitted the second Keeper book, Ravencaller, to my editor, so I’m in a bit of a breather between it and starting up the third not-yet-named book. Right now it’s a bunch of ideas bubbling around in my head, which I’ll hopefully hammer out into an outline that resembles a story in the next week or two.

Anne Leckie’s The Raven Tower. Orbit was kind enough to send me a copy (after I sent an email begging my editor for it, because I will take advantage of my published credentials for the truly important things).

I am dying to show everyone the cover to Ravencaller. It’s of a gray-clad humanoid-raven assassin grandmother dual-wielding scythes with black wings that become shadow and smoke near the wingtips. Her name is Evelyn. She’s the best.

David Dalglish’s Soul Keeper is out now, published by Orbit Books in North America and in the UK.