Let’s start with an introduction: Who is David Dalglish?

Orbit Books has recently published the final book in your Seraphim trilogy, Shadowborn. How would you introduce the series to a potential new reader, and what can fans of the first two books expect from the finale?

The apocalypse happened, and hundreds of years later, the tiny remnant of humanity lives on floating islands above an endless ocean, while above, the sky burns nightly with fire. Using prisms possessing magical powers, the elite of these islands fly about in fanciful gold and silver wings throwing fireballs and blasts of lightning at one another, until the prisms run out and they close in for mid-air sword fights.

Fans of the first two can expect similar battles and supernatural creatures, only on a scale ramped up to eleven as I go completely all out. No more minor skirmishes. Time for war. 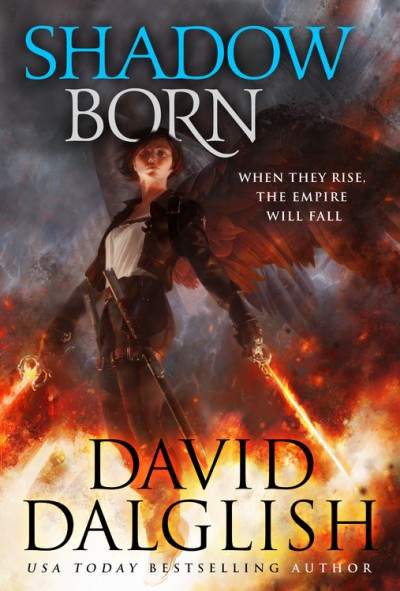 Skyborn came about from an overall love of anime and traditional japanese RPGs like Final Fantasy and Chrono Trigger. I wanted a much more kinetic, exhilarating combat to describe, something to really test out the writing muscles after writing twenty books of standard medieval combat. When I imagined the two main characters, Kael and Bree, sitting together at the edge of an island with their feet dangling over clouds and their eyes skyward, watching a wave of flame bathe the night sky and hiding the stars and moon, I knew this was a story I needed to write.

Now that the series is complete, any lessons learned? Anything you wish you’d done differently?

I wish I hadn’t been so strict with the POV. The first book is solely from either Kael’s or Bree’s perspectives, but as the series went on I gradually added more and it opened up so much more interesting ways to tell this story, especially once I began writing from the villains’ POVs in Shadowborn. I love a good villain, and I love getting inside their head.

The earliest fantasy series I can remember reading was C.S. Lewis’s Narnia books. From there it was easy to dive into Tolkien, and after that, my friends recommended tons of favorites, particularly those in the newly emerging D&D realms such as Hickman and Weis’s Dragonlance Chronicles and R. A. Salvatore’s Drizzt books. 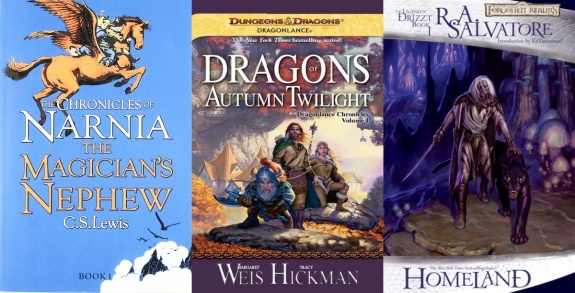 To be honest, I’m having a ball. Working with Orbit’s art department in particular has been a real treat. They’ve blessed me with absolutely amazing covers, and with each new book I eagerly await to see what the newest cover will be. Plus having dedicated professional editors is a nice little perk, too.

The internet is the death of productivity. I used to travel to the library with my laptop to write (they didn’t have WiFi), but recent issues with my neck prevent me from doing so anymore. Now I write on a treadmill desk, and use an application called Freedom to lock me out of Twitter, Facebook, and email so I can write relatively undistracted and safe from my constant impulses to see what new horrible thing is happening in the world.

My first foray into writing was… third grade? Fourth? I remember being super proud of the page count of this ‘novel’ I was writing, which was a shameless rip-off of Chrono Trigger, called Second Death. By fifth grade I had a whole universe planned out, with about seven to eight novels in various lengths of plotting (and by that I mean I had the story in my head and I’d hand-written about ten pages of the beginning). I’d set up a whole redemption arc for the initial villain Magus, battles against evil dragons, destroyed cities, and a hero who just happened to be named Davian; it was totally coincidental that he looked and acted exactly like yours truly.

I stopped writing for most of high school until my senior year, when I enrolled in a Creative Writing class. One hour a day, in the computer lab, with my only requirement that I write something. Topic? Genre? My choice. Length? Up to me. So long as I was writing, and willing to share some of it every month or so, I was good. I wrote a short story about some prospectors who discover a mountain of gold protected by a creature of shadow and teeth. That story took place in an early prototype of what would be my world of Dezrel, where the Paladins, Half-Orcs, Breaking World, and Shadowdance novels are all set. It even contained two characters long-time readers would recognize (Mira and Lathaar).

I’m so very far from an expert on the genre’s current state, but I do know there’s an absolute treasure trove of authors out there. It’s great to see such acceptance of sword and sorcery (at least compared to when I was growing up, when a hero fighting orcs was considered fairly close to the bottom of the barrel). Now Game of Thrones has a liche controlling an undead army vs. a dragon-riding queen commanding a barbarian horde, and no one’s sneering at it. At the same time people like N.K. Jemisin are pushing things further away from the standard quasi-medieval Europe setting, developing worlds so real it almost hurts (plus her orogenes are just so freaking cool).

As for myself? My ambitions are far lower. First and foremost, I want to entertain, and I believe I have entertaining stories to tell. While throwing magic fireballs and polymorphing people into sheep, I’ll also deal with matters of faith, forgiveness, fatherhood, and the like. I want to create characters people love, that they wish to see succeed, and then put them through absolute hell. When the happy ending arrives, it’s because these crazy, silly little creations of mine earned it. If I made you laugh, cry, or email me about how pissed you are that I killed off a certain character, I consider that a victory.

I’m crazy excited for the next series I’m working on with Orbit, The Soulkeeper. I’m returning to my roots with high fantasy, and to worlds awakening to magic, but this time it’s not going to be a vaguely familiar orcs-and-elves type setting like my Dezrel novels. It’s all from scratch, and for the first time I feel I can really stretch my imagination. I’ve got flower-spider people who wrap you in webbing to drink your memories instead of organs, living campfires, crawling mountains, time fairies, guns shooting spells, and so much more. Oh, and half the world’s being blown up and corrupted because it’s not a Dalglish book if the world isn’t in danger of ending.

I just finished up A Blade of Black Steel by Alex Marshall and am currently waiting for Jade City by Fonda Lee to arrive from Amazon. 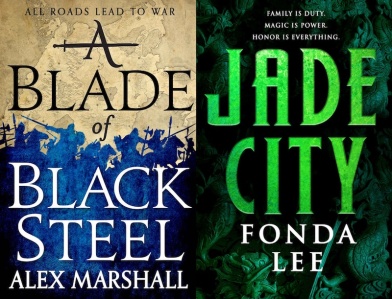 I’m going to cheat and say Saga by Brian Vaughan and Fiona Staples. I could only dream of having the imagination and emotional resonance as their sprawling space opera.

I have a terrible addiction to everything Dark Souls and Bloodborne related. I bought all the guides, watched hours of lore videos by Vaatividya, and died and struggled and died some more to complete the various games. If I could write an official Bloodborne novel, I’d do it in a heartbeat.

The Orbit art department’s already started working on the cover for The Soulkeeper. I won’t see it for months, but by god, I cannot wait until I do.

David Dalglish’s Shadowborn is out now, published by Orbit Books in the US and UK.

2 thoughts on “Interview with DAVID DALGLISH”