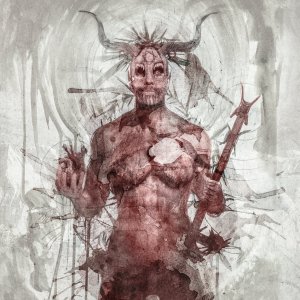 I stumbled across Lord of the Lost one evening, enjoying one of my frequent music video binges. Specifically, their video for “Loreley” appeared in my Suggested list, and decided to give them a try. I rather enjoyed what I heard, and decided to check out a few more of their videos.

Naturally, I then went and bought their latest album, Thornstar. Released through Napalm Records, it’s a solid collection of goth-metal tunes, tinged with industrial and broader soundscapes that should appeal to any Wearer of All the Black Clothes.

Chris Harms formed the band in 2007, in Hamburg, Germany. Sonically, they remind me foremost of their fellow Germans Rammstein: soaring melodies, bombastic choruses and soundscapes, as well as a more-robust and muscular bottom-end. At the same time, however, they lack Rammstein’s tongue-in-cheek sense of humour and dodgy content. Lord of the Lost take their music rather more seriously than Till Lindemann et al. Harms’s vocals certainly made me think of Lindemann’s vocals, too: that sonorous, low-tone (not sure if it’s a baritone, but it doesn’t seem low enough to be bass, and he does sometimes rise into a tenor).

The album starts with a middling first track, “On This Rock I Will Build My Church”, which features Harms’s metal-scream-vocals, which are fine but by no means his strength. They feature more prominently again in “Under the Sun” to much greater effect, complementing his sung, “clean” vocals much more effectively. The stand-out tracks for me are “Loreley”, “Black Halo” and “Naxxar”, all three of which are quite indicative of the band’s overall sound. “Cut Me Out”, is a more mellow, atmospheric and sweeping song, with the bombast stripped right back. Later tracks on the album feature more piano, which is incorporated very nicely to juxtapose the heavier guitars and drums.

Other touchstones, if you’re looking for “For Fans of” references, would be Charon and recent Amorphis. Thornstar has similar mournful, deeper-toned melodies that have made those two bands so brilliant. (Such a shame that Charon are on an indefinite hiatus at the moment.) When the music leans more towards industrial, I was also reminded a bit of the first two solo albums by Mortiis — the first of which, The Smell of Rain, is fantastic and remains one of my favourite goth/industrial albums.

There’s a lot to like on Thornstar. There were a couple of dips, but on the whole the band has crafted an album that maintains its quality very well from tracks two to twelve (the first and final songs on the regular edition of the album don’t work for me as well as the rest), with varied changes in key and pace without ever becoming shoe-gazing or boring.

Bombastic, anthemic gothic rock, I’m sure this will appeal to many fans of that sub-genre. If you like your metal more melodic, then I’d also recommend you give this a try.

Below are a couple of music videos to give you an idea of what the album offers. (The ability to embed videos in a music review post does make me wonder what is the point in the written portion of a review — if you want to know what the band sounds like, it is more efficient to just watch/listen to the videos, no?)