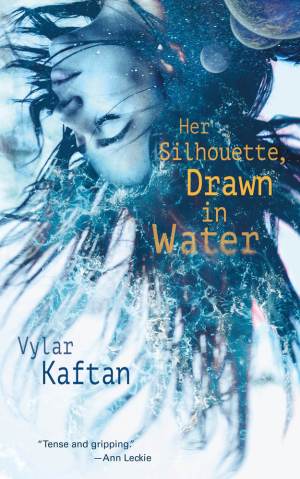 An intriguing novella about identity, memory and relationships

All Bee has ever known is darkness.

She doesn’t remember the crime she committed that landed her in the cold, twisting caverns of the prison planet Colel-Cab with only fellow prisoner Chela for company. Chela says that they’re telepaths and mass-murderers; that they belong here, too dangerous to ever be free. Bee has no reason to doubt her — until she hears the voice of another telepath, one who has answers, and can open her eyes to an entirely different truth.

I’ve not read anything else by Kaftan, so I wasn’t sure what to expect when I started Her Silhouette, Drawn in Water. What I found was a well-written, thoughtful and thought-provoking novella that touches upon a number of interesting and timely issues, hung on a science fictional frame.

It’s very difficult to review this in much detail without giving everything away. The novella started off with some tantalizing hints about the two characters mentioned in the synopsis, as well as the setting and their situation. The story quickly grows, however, to become something much more — and, as it turned out, even more interesting and inventive than the synopsis may suggest. There are some interesting science fictional aspects to the story, perhaps not as far in the future as one might think.

Her Silhouette, Drawn in Water asks a number of interesting questions: If you have no memories, who are you? How can you trust yourself and your instincts, if you don’t remember any of the experiences that informed them?

Her Silhouette, Drawn in Water is written in a measured pace. It’s short, sure, but it’s not in a hurry to tell its story, nor is it over-stuffed to make it seem longer. Kaftan has a story she wants to tell, and ideas she wants to touch upon, and the book does this very well. The author’s prose is very good, too.

I think the only thing that didn’t quite work for me was the ending, which was rather more abrupt than I was expecting and hoping. However, it does follow a very interesting reveal, which was handled and written quite well.

A very interesting novella, I look forward to reading more by the author. Recommended.

Vylar Kaftan’s Her Silhouette, Drawn in Water is due to be published by Tor.com on May 21st, in North America and in the UK.