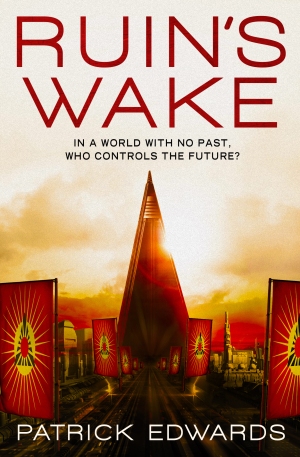 Today, we have an excerpt from Ruin’s Wake by Patrick Edwards. Published tomorrow, it is a science fiction novel set on a world under control of a totalitarian government, here’s the synopsis:

Ruin’s Wake imagines a world ruled by a totalitarian government, where history has been erased and individual identity is replaced by the machinations of the state. As the characters try to save what they hold most dear – in one case a dying son, in the other secret love – their fates converge to a shared destiny.

An old soldier in exile embarks on a desperate journey to find his dying son.

A young woman trapped in an abusive marriage with a government official finds hope in an illicit love.

A female scientist uncovers a mysterious technology that reveals that her world is more fragile than she believed.

I am to be abandoned, it seems, by ungrateful wretches who have no loyalty.

I called the little meeting and asked my staff if they would stay through the cold months. I thought I knew my people, thought they valued discovery and knowledge as highly as I do. A little weather wouldn’t be enough to scare them.

They overwhelmingly voted to leave, and I had to concede – what option did I have? To do otherwise would only have ended in either mutiny or apathy, neither of which would get us anywhere. The meteorologist with the voice like a beetle stood off to one side with a face that made me, a woman not given to violence, want to slap him senseless.

They are packing up now, ready to leave in three days. Good riddance to them. The two idiots even deigned to look guilty when I told them I was staying – obviously not guilty enough! They changed their tune when I assured them I would withdraw my endorsement from their respective theses and notify the faculty that they were unfit for further advancement. The outrage on their faces was worth it.

Mason is staying. He came up and told me so. I replied that I expected no less, though inside I was glad that I wouldn’t be completely devoid of human contact for the next few months. I asked if he would not rather follow his new ‘friend’ back to Karume, to shack up there with her, but he shrugged as if it were nothing important.

The cold seeps into everything and I haven’t seen Ras for an age. The constant whistling of the wind hitting the side of the outpost is driving me to distraction. When we are not down in the chamber we play music over the intercom (the usual, State stuff: tinny, dull, but better than nothing). I have taken to wearing furs even when in my room and office; even more layers go on if we venture down.

I’m afraid I am prey to base superstition. Since I was abandoned I’ve found something disquieting about the empty corridors. The torus chamber is the worst, despite the extensive lighting I had installed. The shadows skeet unnaturally over the surfaces and the sounds are odd, muted. I do not like it. I spend the minimum possible time there and never go alone.

I was trying my best to avoid outright asking Mason to come with me every time, but somehow he always seems to find a reason to come along, as if a break in his duties always crops up at the right time. Does he know I don’t want to be alone down there? If he does, he never mentions it. He makes this strange place easier to deal with, and I take comfort from the fact he is either untroubled or knows how to hide it.

At first, I was worried I might betray my unease to him, but over time this has lessened. Perhaps proximity and isolation makes me more comfortable around him. He is pleasant when he needs to be, and, more importantly, silent when he does not.

Patrick Edwards’s Ruin’s Wake is published tomorrow by Titan Books in North America and in the UK. 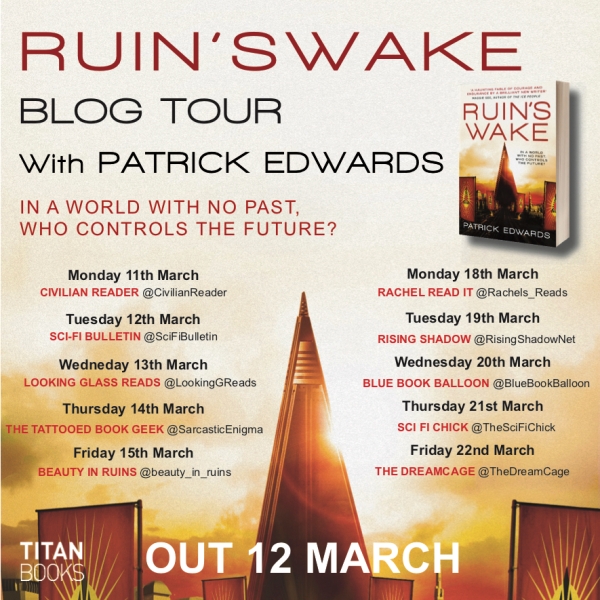