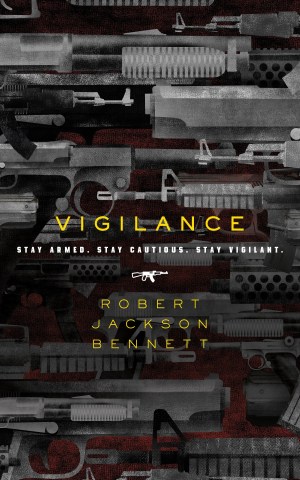 A superb parable of an all-too-believable future American dystopia…

In Vigilance, Robert Jackson Bennett has written a frightening parable of a future, rapidly-declining America that has surrendered itself to gun violence. The author has managed to pack in a lot of commentary into this powerful novella. I very much enjoyed reading this, despite how disturbing it was.

As America continues to be rocked by gun violence in real life, this novella feels very timely. The statistics for 2018 alone are frightening. In Vigilance, Bennett examines what America might look like if it wholly accepted mass shootings as a part of American life. Of course, these events are turned into entertainment. Some might think this is cynical, but I think it’s entirely believable. America’s entrepreneurial spirit has always found a way to monetize culture, after all.

Many of the characters have internalized the endless stream of terror and fear that is fed through news channels and social media (the latter of which is especially manipulative and frightening in the novella). McDean, a producer of Vigilance is especially cynical about America, but it is a cynicism that is borne of understanding how to manipulate his viewers.

“Since the turn of the century, America’s media had been constantly telling Americans that they weren’t safe, because that was what people wanted to hear: the human brain had evolved to prioritize threats, so they instantly migrated to them. This meant the news gave them all the threats they could have possibly wanted to hear—anything for a click or a ratings bump. Eventually, Americans had gotten so conditioned that they couldn’t conceive of an America without constant danger. They saw people shooting on the news, screaming on the news, dying on the news, and they’d started to believe—This is just ordinary life. And it was up to you to deal with it.”

The author populates the novella with a number of different characters drawn from all over the political, corporate, socio-economic and psychological spectrum. There are moments of frustration, desperation, abject terror, and resignation. Each of the POV characters is very well-drawn and three-dimensional (in some cases, also utterly reprehensible). While certain characteristics seem exaggerated, they nevertheless feel realistic for this nightmare version of America (in fact, there are crazier real people in American politics and media today).

As with all of Bennett’s work, one must resist the temptation to quote endlessly from the text. He is easily one of the best writers working today: intelligent, sharp, clear. His narratives are gripping, the pacing is superb. The novella is also, in many ways, a more intelligent commentary on American culture and society than most of what is published by pundits and news organizations. Bennett draws on language that is not far-removed from what we hear coming out of the mouths of NRA spokespeople, members of the right-wing, and the more-unhinged elements of the tech world. He offers a dark reflection of what is happening now.

Vigilance is published by Tor.com on January 29th, 2019, in North America and in the UK.

Also on CR: Interview with Robert Jackson Bennett (2012); “City of Stairs and the Super Tropey Fantasy Checklist”; Excerpt from City of Stairs; Reviews of The Company Man and City of Stairs