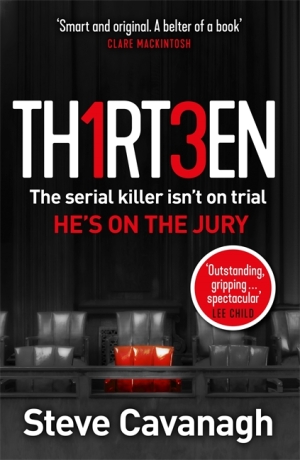 I get a lot of compliments about the plotting in my books. I’ve been lucky, in that way. And yet every single piece of praise about the plot of Thirteen, or any of the other Eddie Flynn books makes me feel like a fraud.

Now, let’s be serious here. I’m also a writer, and that means I love it when people enjoy the books and when they say nice things. Keep those compliments coming. And the nice Amazon reviews. I like those too. I may feel like a fraud, but I’m willing to forego my feelings for event the faintest praise.

What I really mean is I don’t know how to plot a novel. I have no clue. In my mind plotting means colour-coded flash cards, whiteboards with all the names of the characters written large with arrows flowing between them, an outline, a beat sheet, a corkboard covered in Post-It notes, pages in a journal with notes for every character, a line graph showing the five-act structure, a detailed plan of the book with every scene sketched out from beginning to end.

If I had a whiteboard I would end up drawing cartoons on it. Any index cards that found there way into my house would immediately be lost, I’m not entirely sure what a beat sheet is, a corkboard would rapidly turn into a dartboard, I do have notebooks but I only use them for editing so I can remember character names and what happens in the story, I couldn’t draw a graph to save my life, I don’t know what the five acts are in a five-act structure novel, and when I begin writing a book I don’t know what the next sentence will be never mind what’s going to happen at the end.

Some people call my way of writing pantsing. Writing by the seat of your pants. That’s pretty much what it feels like. Literary authors would say they are unearthing the novel from their subconscious. Well, they would say that wouldn’t they? I just tell the truth. I make it up as a I go along.

If I don’t know what’s going to happen next, I’m pretty sure the reader won’t either.

The advantage I have is I like editing. And I stop.

At around twenty-thousand words I stop writing and I go back and read what I’ve written before. I do the same at sixty-thousand. At both of those points I will see what I can make out of what I’ve written. In other words, an innocuous phrase or description or even a character can be taken at those review points and then turned around later on.

I like writing twists. It’s my favourite thing to do. The ones that will completely fox the reader, in a good way.

The good news is I don’t have to be able to plot those out in advance. I can see at various points in the book where the story might be going and then it’s my job to take it somewhere else without the reader realising.

Thirteen has it’s twists and turns. None of them were worked out in advance. They sort of occurred naturally during the writing.

If you read Thirteen and think “Oh, I know where Steve’s going with this,” you’re probably dead wrong. Because I can assure you, I had no idea.

Steve Cavanagh‘s Thirteen is out now, published by Orion. The paperback edition is due out on June 14th. Here’s the official synopsis:

The serial killer isn’t on trial. He’s on the jury…

‘To your knowledge, is there anything that would preclude you from serving on this jury?’

Murder wasn’t the hard part. It was just the start of the game.

Joshua Kane has been preparing for this moment his whole life. He’s done it before. But this is the big one.

This is the murder trial of the century. And Kane has killed to get the best seat in the house.

But there’s someone on his tail. Someone who suspects that the killer isn’t the man on trial.

Kane knows time is running out — he just needs to get to the conviction without being discovered.