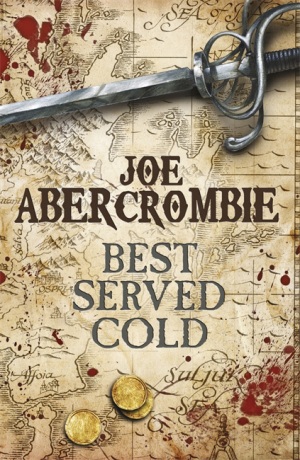 Abercrombie expands the World of the First Law

There have been nineteen years of blood. The ruthless Grand Duke Orso is locked in a vicious struggle with the squabbling League of Eight, and between them they have bled the land white. While armies march, heads roll and cities burn, behind the scenes bankers, priests and older, darker powers play a deadly game to choose who will be king.

War may be hell but for Monza Murcatto, the Snake of Talins, the most feared and famous mercenary in Duke Orso’s employ, it’s a damn good way of making money too. Her victories have made her popular — a shade too popular for her employer’s taste. Betrayed, thrown down a mountain and left for dead, Murcatto’s reward is a broken body and a burning hunger for vengeance. Whatever the cost, seven men must die.

Her allies include Styria’s least reliable drunkard, Styria’s most treacherous poisoner, a mass-murderer obsessed with numbers and a Northman who just wants to do the right thing. Her enemies number the better half of the nation. And that’s all before the most dangerous man in the world is dispatched to hunt her down and finish the job Duke Orso started…

Springtime in Styria. And that means revenge.

Joe Abercrombie’s First Law trilogy is one of my favourites: a great story, fantastic characters, superb prose. For some reason, it took me a while to get around to reading Best Served Cold (originally published in 2008). I finally read it after taking a glance at the first pages, and being quickly drawn in by not only the author’s great prose, but also his gift for characterization. Unfortunately, though, I finished the novel with a very different feeling to that I had after finishing Last Argument of Kings…

Let’s start with what Abercrombie does so very well, and better than many of his peers: characters and prose. Unlike with many fantasy authors, I never struggle to get to know new characters. Very quickly, as in Best Served Cold, I felt I knew Monza, Shivers, Friendly (well, as much as one can get to know Friendly) and their fellow travellers and antagonists. Abercrombie achieves this by just having his characters interact and engage with the world around him, rather than info-dumping or using tired tricks that can feel like formal introductions. Each new character adds to not only the story, but the overall understanding of the world and who lives in it.

Abercrombie’s prose must be among the best in the genre: fluid, uncluttered for the vast majority of the novel, and often funny. Not only that, the author has a real facility with a wide range of narrative tricks and techniques, and Best Served Cold is a great showcase for this. Similar scenes are presented in varied and new ways, which means we never feel like we’re reading the same scene only with slightly different particulars. These ‘tricks’ can be as simple as cross-cutting (to use movie lingo), or including interesting internal dialogue, and so forth. Really impressive. Abercrombie also peppers the novel with a variety of great, observational one- or two-liners. For example:

“You were a hero round these parts. That’s what they call you when you kill so many people the word murderer falls short.”

Around two-thirds into the novel, I started to think of this as the Dunkirk of fantasy novels. I realized that I was having many of the same thoughts as I did when I watched Christopher Nolan’s movie. I admit, this is kind of weird, but go with it for a second. I remember reading a review that described it as a perfectly made two hours of dullness (the direct quotation escapes me). Best Served Cold is often beautifully composed and crafted — it is difficult to fault Abercrombie’s prose and characterization. At times, the novel is arresting (and amusing — which Dunkirk was not). The action scenes are attention-grabbing.

At the same time, the novel is also overlong and ultimately a bit dull. It became a slog to pick it up and continue reading. Despite the blood shed by the characters, it also felt slightly bloodless — the battle scenes felt like disruptions, and I wish Abercrombie had kept the story to smaller moments (like the assassination at the bank). I think I understand why he chose to approach the story the way he did, but it ultimately didn’t work for me. There is maybe a whiff of self-indulgence about the novel. Each time the plot moved forward, it felt like we should have been far closer to the end than we were. This is something I felt with Last Argument of Kings, too — the third novel in Abercrombie’s debut trilogy was too long, bloated and should have been pared back, tightened. Best Served Cold, a stand-alone, also felt too long. The characters were relentlessly grim, or ultimately irredeemable. My sympathies for the characters vanished over the course of the novel, and by the end I found that I really didn’t care if Monza was successful, or if anyone survived. Made for a bit of an empty finish, and not as rewarding as a novel of this length should be.

I wanted to like this novel so very much — I thoroughly enjoyed The First Law trilogy, and I still consider Before They Are Hanged to be the best middle-volume of any trilogy I’ve read. Best Served Cold is in many ways a master class in (grimdark) fantasy writing. Abercrombie has few betters in terms of sentence- and paragraph-level craft — he brilliantly uses so many narrative tricks and techniques throughout this novel, all the while keeping things together in a cohesive whole. Nothing was jarring. (Although, some battle/fight scenes did go on longer than necessary, but I will confess to having limited patience for these kinds of scene to begin with.) Finishing Best Served Cold, my enthusiasm for continuing in the First Law world diminished considerably — especially when one considers that the next book, The Heroes, is the story of a three-day battle…

If you love Abercrombie’s work, then I would definitely recommend you read Best Served Cold. I’m just sad to say that it left me feeling rather dissatisfied. (Mind you, I did manage finish it, which also puts it about 90% of the fantasy novels I’ve tried to read in the past two years.)

Joe Abercrombie’s Best Served Cold is published in the UK by Gollancz and in North America by Orbit Books.