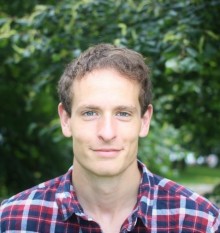 Let’s start with an introduction: Who is Leo Carew?

I am a 26-year-old from London. I studied biological anthropology at university, which played a huge role in The Wolf. Outside of writing, I’m training to be an army doctor and am love exploration, particularly in the Arctic.

Your debut novel, The Wolf, will be published this month by Orbit (US) and Wildfire (UK). It looks interesting: How would you introduce it to a potential reader? Is it part of a series?

It’s the first in a trilogy which imagines that more than one species of human survived the Ice Age. It follows a protagonist from an alternate race of people (the Anakim) after his father is killed in battle and he attempts to inherit the throne. At the same time he has to resist an invasion from another race of humans, forcing him to gather allies as fast as possible, and turn to some people he’d rather not…

Mostly my studies in anthropology. I loved the thought of a period of time where multiple species of human walked the earth and interacted. What the border between them would have been like was a constant source of fascination to me, and after a while I had some favourite characters with whom I would explore that world.

In terms of creativity, it tends to be music and running. Most of the big scenes in The Wolf are set to songs in my head – good songs really get my creativity going. And lots of my favourite turns of phrase come to me when I’m running, and thinking about a line which has been bothering me, or an event I don’t think I’ve described quite right. Also boredom – anywhere I’m on my own, I usually start daydreaming.

My dad used to read me the Lord of the Rings stories before bed as a child. He’s got a great reading voice, and that was fairly magical, having them incanted before sleep.

I love the publishing industry – it’s incredibly social. People make so much effort with each other compared to other workplaces I’ve been involved with and always seem to be up for a drink!

I love the act of writing too. I’ve been compelled to do it for years, and very happy with it just as a hobby. I’m starting to think it might be best as a part-time activity, though. As a full-time job it is quite a solitary existence, and I’ll have to see whether that bothers me long-term. I thrive particularly off teamwork so it might suit me better to use writing as a break from whatever my main job is. It’s been undeniably wonderful to fulfill a long-held dream though, and I keep pinching myself that I get to do it as a job.

I can’t write at home – I try and separate working and relaxing time as much as possible. So I got to local coffee shops and tend to start aggressively, whether I’m in the mood or not! Once I’ve produced 1-1.5k words, I go back and spend most of my time editing them.

For research, I always try and go right to the source material. With the internet particularly, so many ‘facts’ are unfounded, and I don’t use anything unless I can see where it’s come from.

The weirdest thing I do is probably related to audiobook selection. I always listen to one as I go to sleep, and if I don’t think it’s particularly good, I have to change it to something I think is well-written. Otherwise I get worried I’ll subconsciously absorb a style of writing I’m not enjoying, and it’ll come out in my own work! While writing The Wolf, I listened to Wolf Hall by Hillary Mantel a lot. I love her turn of phrase and find her writing very elegant, and was hoping that might rub off on me!

I first realized I wanted to be a writer when I was about 10, and wrote a piece of creative writing for school. My teacher was very pleased and read it out to the rest of the class. As someone who hadn’t done particularly well at school before then, that felt like a big moment and I pretty much decided I was a writer then and there.

My first foray into producing a novel was only a couple of years later, and was actually a book in the same series as The Wolf. I was 12 and wrote about 100k words of what is now the second book in the Under the Northern Sky series. I never tried to get it published, and many years later wrote The Wolf as a prequel. I like that I’ve had all that time to work on this world and the story, but I can’t re-read the books I wrote as a child, it’s all too painful!

There’s some great modern fantasy, and particularly with the success of Game of Thrones bringing the genre a bit more mainstream, I think it’s a splendid time to be a fantasy author. My work is a little alternative as there’s no magic, but in terms of the themes, I hope it might appeal to readers who enjoy David Gemmell or Joe Abercrombie.

I’m working on the sequel to The Wolf at the moment – I suspect this series will occupy me for a while yet. But in the future I’d really like to do something post-apocalyptic.

I usually have one book and one audiobook on the go. Right now I’m listening to The Way of Kings by Brandon Sanderson, and reading a biography of the explorer Ernest Shackleton.

The Golden Compass by Philip Pullman. Probably my favourite of every book I’ve read. I love the world he creates, and the tone of it is just perfect.

I didn’t learn to read until I was 10 years old! I am dyspraxic and struggled with symbol-decoding (and was also an exceptionally stubborn child who thought reading just might not be for me). It wasn’t until I got the Harry Potter audiobooks that I decided reading might be worth the effort. I listened to them until I’d learned them off by heart, and then matched the noises I remembered to the shape of the words on the page. A slightly alternative means of getting there…

There’s a lot to look forward to. Mostly an expedition to Greenland which I’m leaving for in about a week. We’re going to be summitting some unclimbed mountains and doing climate-change research. I really can’t wait.

Leo Carew’s The Wolf is published by Orbit in North America and Wildfire in the UK.