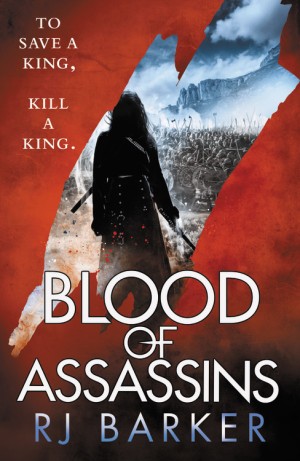 In a desperate bid to escape the bounty on his head, assassin Girton Club-Foot has returned to Maniyadoc, but the kingdom he knew no longer exists.

Three kings battle for supremacy in a land ravaged by war-and one of them is his old friend Rufra. With threats inside and outside the war encampment, Girton races to find the traitor behind an assassination plot. But his magic can no longer be contained and Girton may not be able to save even himself.

It’s assassin versus assassin for the life of a king.

RJ Barker’s Age of Assassins is one of the best debut fantasies I’ve read in some time. At a time when I’ve been struggling with the genre, Barker’s debut caught my attention from the opening scenes — it was amusing, the characters were very well-drawn, and the story was far more focused than many fantasies I’ve tried recently. In Blood of Assassins, Barker returns readers to Maniyadoc, five years after the events of the first novel. I enjoyed this novel a great deal.

The fact that this novel is set five years after the events of the previous was something I very much enjoyed. The characters have all grown, and racked up a fair amount of new life experience and traumas. Barker doesn’t wallow in the past, though, giving readers just enough to explain certain changes in the individuals and the world. The character feel more developed.

This allows the story to keep moving at a fair clip. Barker’s not in a rush, however, and the story has a number of red herrings and twists that should keep readers guessing until near the end. We’re introduced to new characters, new antagonists, and some unexpected new allies. We learn more about the magic system in this world, and the people’s ingrained, understandable fear of what sorcerers are able to do. Barker also adds some more details of his world at large, no doubt setting up the next novel in the series.

Girton, our club-footed assassin protagonist continues to develop well. Despite his physical condition, he remains a prodigiously-skilled assassin and fighter, coming to terms with what he’s been up to over the preceding five years. He makes rash decisions, a few mistakes (some deadly), and doesn’t get everything right. His mistakes are not easy to forgive — nor, do I believe they are supposed to be. This is a brutal world, in which life is characterized by hardship and blood — certainly in Maniyadoc. The battle scenes are good, but not self-indulgent. (I have a limited patience for long battle scenes, despite my fondness for the fantasy and sci-fi genres as a whole — which are, after all, so often about war, conquest, etc.)

I came away from the novel with not the greatest amount of sympathy for Girton, but at the same time I found him to be a more interesting character. He is, after all, an assassin — why would we expect him to be a saint?

To sum up, then, Blood of Assassins is an excellent follow-up to Age of Assassins. Fans of the first novel should certainly find much to like in the sequel. I am very eager to get my hands on the third novel, King of Assassins. This series is highly recommended.

Blood of Assassins is out now, published by Orbit Books in the US and UK.

Also on CR: Interview with RJ Barker (2017); Review of Age of Assassins

4 thoughts on “Review: BLOOD OF ASSASSINS by RJ Barker (Orbit)”