Skip to content
HomeBooks on Film: YOU WERE NEVER REALLY HERE

This movie is based on a novella of the same name by Jonathan Ames (a review copy of which I received quite recently). A brutal crime story, the movie stars Joaquin Phoenix as Joe, who is hired to rescue a young girl kidnapped by a sex ring. The movie, directed by Lynne Ramsay, is already racking up accolades and awards, and was the winner of Best Actor and Best Screenplay at the 2017 Cannes Film Festival. Here’s the trailer:

The movie is due to arrive in cinemas in April 2018 — distributed by Film 4, Amazon Studios, and others. 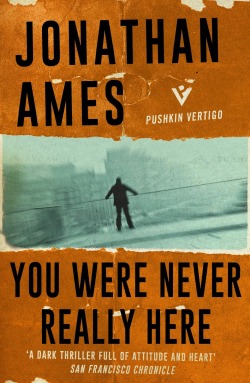 Jonathan Ames’s You Were Never Really Here is published in North America by Vintage (a movie tie-in edition is due out in March), and in the UK by Pushkin Vertigo. Here’s the synopsis…

A gritty, harrowing story of corruption and one man’s violent quest for vengeance.

Joe has witnessed things that cannot be erased. A former FBI agent and Marine, his abusive childhood has left him damaged beyond repair. He has completely withdrawn from the world and earns his living rescuing girls who have been kidnapped into the sex trade.

When he’s hired to save the daughter of a corrupt New York senator held captive at a Manhattan brothel, he stumbles into a dangerous web of conspiracy, and he pays the price. As Joe’s small web of associates are picked off one by one, he realizes that he has no choice but to take the fight to the men who want him dead.

Brutal and redemptive in equal measure, You Were Never Really Here is a toxic shot of a thriller, laced with corruption, revenge and the darkest of inner demons.