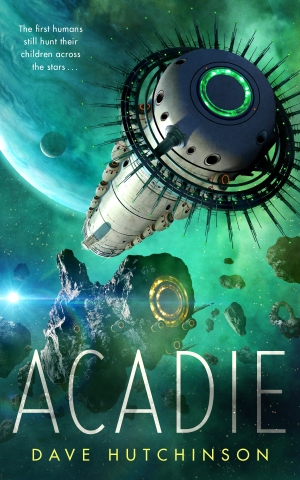 The first humans still hunt their children across the stars…

The Colony left Earth to find their utopia–a home on a new planet where their leader could fully explore the colonists’ genetic potential, unfettered by their homeworld’s restrictions. They settled a new paradise, and have been evolving and adapting for centuries.

Earth has other plans.

The original humans have been tracking their descendants across the stars, bent on their annihilation. They won’t stop until the new humans have been destroyed, their experimentation wiped out of the human gene pool.

Can’t anyone let go of a grudge anymore?

I wasn’t sure what to expect from Acadie. I’ve only heard great things about Hutchinson’s Fractured Europe trilogy, so I had pretty high hopes for this stand-alone novella. I’m happy to report that it exceeded my expectations, and was a lot of fun. I think a lot of people are going to love this.

It took a little while for the novel’s tone to become clear. What started as a pretty straight-forward, sort-of-serious sci-fi novel revealed itself to have one hell of a sense of humour. The first clue? The fact that two of the first spacecraft we encounter are called Something Better Than That (“sprayed on the side in Comic Sans”) and One Potato, Two Potato… There is a gentle whimsy flowing throughout this story, and Hutchinson does a fantastic job of keeping everything moving.

The story follows Duke, the unwillingly-elected president of the Colony, and a few of his companions and colleagues. Through his eyes and experiences, we get to see the colourful and frankly chaotic Colonial society. Everyone there is frighteningly intelligent, and has near limitless space to experiment, study and invent to their heart’s content. This is not without its downsides, of course:

“To be honest, living among very, very bright people could be a total pain in the arse. Leaving aside the ego-niggling certainty that I could visit any hab, throw a rock, and be virtually guaranteed to hit someone whose IQ was some frightful multiple of mine, the bastards wouldn’t stop arguing.”

Over the course of the novella, we learn a bit about Duke’s past, as well as more information about those who established the Colony in the first place. Why are they there? Why did they flee from Earth? And why, when a probe from Earth enters their area of space, do they need to scramble to evacuate…? The ending was a surprise, and superbly executed. It was a great twist, which kind of knocked me back a bit, as realization dawned. Really well done.

If you’ve never read anything by Hutchinson, then this would be a great starting point (if you can wait until September, that is). If you are a fan of his writing already, then I have no doubt that you’ll enjoy this as well. Acadie is a fun science fiction story, which was a joy to read. I, for one, also can’t wait to read more of Hutchinson’s work.

Dave Hutchinson’s Acadie is due to be published by Tor.com in September 5th, in the US and UK.