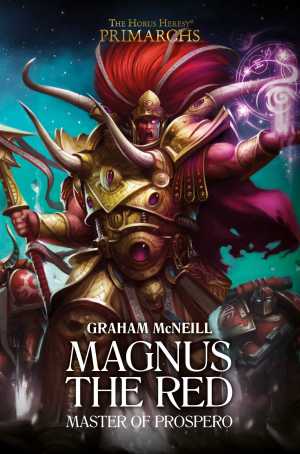 On a fracturing world, Magnus and his Sons’ powers are unleashed…

Lord of the mystical and uncanny, Magnus the Red has long studied the ancient crafts of sorcery. A psyker without peer, save only for the Emperor himself, he commands his loyal followers of the Thousand Sons Legion in the Great Crusade, though also vigilant for any lost knowledge they might recover from the remains of dead human civilisations.

Now, fighting alongside his brother Perturabo of the Iron Warriors, Magnus begins to foresee an approaching nexus of fate — will he remain true to their mutual aims, or divert his own efforts towards furthering his own mastery of the warp?

This third novel in Black Library’s Horus Heresy: Primarchs series offers readers a glimpse of insight into Magnus the Red and his Thousand Sons Legion. Framed as a reminiscence of Magnus, it tells the story of a particular campaign and the terrible foe the Thousand Sons and Iron Warriors faced together in the early years of the crusade.

Aside from the huge psychic displays that one can expect from any substantial story featuring Magnus the Red, this short novel also features a fair amount of attention on the Thousand Sons’ anxiety over their specialties. Unlike the other Legions, Magnus’s include a considerable number of psykers, and prodigiously talented ones. His favoured son, Ahriman is a main character in the story as well.

… most of all he shared their deep longing to reveal their true selves. Their powers were as much a part of them as breathing, and to keep that hidden from their brother Legions was to keep a part of their soul in chains.

Only a handful of decades has passed since the Sons were united with their Primarch, and after confronting the deadly, widespread threat of mutation the Legion suffered from, the Thousand Sons have rejoined the crusade. They are cautious about displaying their mastery of the warp, of showing just how powerful they are. An admonition from Perturabo suggests the Thousand Sons (maybe all Legions?) have been warned to not meddle with the warp too deeply. Nevertheless, as the story progresses, a number of the Legion are forced to unleash a measure of their powers — including Magnus, whose feat of psychic strength is… well, bombastic to say the least.

Perturabo hasn’t featured too prominently in the series so far (save for in Angel Exterminatus), so it was nice to get his character fleshed out a bit more in advance of his own Primarchs novel. Of particular note, in my opinion, is the closeness and affection between Magnus and Perturabo. After the aforementioned feat of psychic mastery, and the incredible physical toll it takes on Magnus, they share a private moment, during which Perturabo says the following:

“You came a heartbeat from death,” he whispered. “By all rights, you should have died. And our Father’s Great Crusade would have been robbed of one of its brightest sons, brighter even than dear Horus. More importantly, I would have lost a dear brother. There are none among our kin I regard as highly as you, so promise me you won’t risk your like like that again.”

Magnus the Red is not McNeill’s best Heresy work, but it is nevertheless a strong addition to the growing canon. It’s fast-paced, engaging and illuminating. The author manages to make it feel familiar, while also providing a slightly different kind of Thousand Sons story. If you’ve been following the main series and/or the Primarchs series, then this is certainly a must-read.

Magnus’s story will continue in the next Horus Heresy novel, The Crimson King (also written by McNeill), which I am very eager read.

Magnus the Red is out now, published by Black Library.