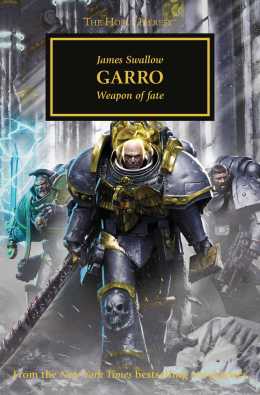 The formation of the Knights Errant, and the start of a new religion…?

From out of the shadows of the Silent War, a hero emerges. Clad all in grey, an errant warrior of the Legiones Astartes kneels before the Regent of Terra, and accepts a solemn new duty – Battle-Captain Garro, once commander of the Eisenstein, now Agentia Primus of Malcador the Sigillite. From the desolation of Isstvan to the halls of the Imperial Palace itself, he stands as a paragon of loyalty and protector of the innocent, ever ready to strike back at the traitorous allies of the Warmaster. But Garro is walking a path of his own, one that may lead him to question his own place in the Imperium… and what if he, too, should falter?

This book collects a number of James Swallow’s Nathaniel Garro stories. (Swallow confirms that there will be more, in his Afterword.) Those stories that were originally released as audio dramas are presented in expanded prose versions, with additional scenes and woven into a chronological, continuous narrative. The book ends with the momentous Vow of Faith, originally published as a limited edition novella. For fans of the Horus Heresy series, this is a must read.

I listened to most of the original audio-dramas included in Garro, but I must say Swallow has done a great job of converting them to prose, and it certainly felt like they were more complete stories. They’re stitched together brilliantly, and when read as a whole you see more of Garro’s evolution as an agent of the Sigillite, and a believer in the Lectitio Divinitatus, the budding religion growing up in the wake of the Emperor’s apparent divinity.

The story includes Garro’s recruitment of the first Knights Errant — Ultramarine Codicier Rubio, former World Eater captain Varren, and also a long-absent hero from the first trilogy of Heresy novels. Each is brought into the fold in a very different manner, but also brings with them different skills and strengths to add to Garro’s and the Sigillite’s shadow war against the Traitors. The second half of the book is more focused on Garro’s growing faith, his attempt to keep it hidden from a still strictly-secular regime, and his search for a suspected saint. Throughout the book, he is trying to figure out his new role in the Imperium, and what the Sigillite’s overall strategy might be. It is perhaps this insecurity that exaggerates his bluntness and need for control when dealing with not only his new comrades, but pretty much everyone with whom he meets and deals.

Swallow is a great writer, and he’s done a very good job in creating one of the most interesting and consequential characters in the Heresy epic. I think there are still a few things that could be expanded upon, and after spending so much time recruiting Rubio, Varren et al, it would be nice to see them deployed in the war against Horus and the Traitor Legions. It would be especially interesting to see Varren, Garro and Loken confront their former brothers.

Also, while Garro brings together most of the titular character’s early involvement in the formation of the Knights Errant, the fact that his story was originally released as separate, short audio dramas meant there were times when the story lacked as much depth as it perhaps would have had if his story had been conceived as a full-length novel. A minor complaint, but it did occur to me — the balance to the narrative was slightly off, at times. This is less of a problem in the second half, formed as it is from a longer story. I know a lot of people would like Swallow to keep writing Garro short stories, but I think from this point onward, the character and series would be better served by longer, more involved stories.

Overall, a very good addition to the series, and definitely recommended.