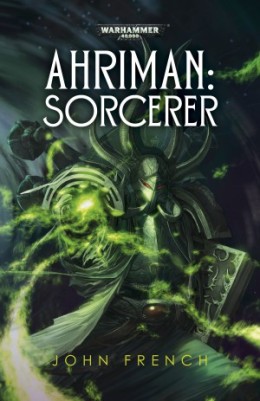 Ahriman, greatest sorcerer of the Thousand Sons and architect of the Rubric that laid his Legion low, continues to walk the path towards salvation, or damnation. Searching for a cure for his Legion, he is forced to consider – was the great ritual somehow flawed from the very beginning? The answer may lie within the mysterious artefact known as the Athenaeum of Kalimakus, a grimoire of forgotten knowledge that is reputed to contain the exact words of the lost Book of Magnus… or, perhaps, even a transcription of the primarch’s deepest and most secret thoughts.

I’ve enjoyed all of French’s Ahriman fiction: he does a great job of adding layers to the character, and presenting him as a conflicted, ambitious, and driven actor in the WH40k universe. Ahriman: Sorcerer, while suffering a few middle-book issues, is a good continuation of his story.

There’s a common feature in Thousand Sons-related fiction, these days (at least, it appears to be a more recent feature to me): messing about in or with time. For the main, this works really well (see, for example, Chris Wraight’s recent Fatespinner). There’s some of that at play in Sorcerer, but this novel prefers the mystery that so often surrounds sorcerers of the Thousand Sons, and Ahriman in particular. Unfortunately, it’s not executed as smoothly as French has managed in the past. As a result, there were times when the story felt a little distant, a little difficult to fall in to — a lack of clarity caused confusion, instead of heightening anticipation or surprise.

This novel felt like a series of well-written set pieces, clearly connected, but maybe extended beyond what was necessary. The characters are all interesting, and there are some interesting developments along the way. There are battles on the corporeal and psychic planes; there’s sneakiness; there’s betrayal… There really is everything we could want from a Thousand Sons story. We see some of Ahriman’s impressive psychic abilities, not to mention his gift for long-term planning.

However, while I enjoyed much of what was in the book, it never fully clicked: it wasn’t clear where it was going, or why we needed to tag along for the journey. I’m sure the relevance and importance of the events covered will become clear in the final volume in the trilogy, Ahriman: Unchanged. However, I came away thinking I hadn’t got as much out of the novel as I had hoped, and that the first book managed to do a lot more character-building while also delivering more story. I will be reading the third novel (and soon, hopefully), and I hope French manages to pull out all the stops for an epic conclusion. If you’re a fan of the character and setting, then I’d still recommend the novel — and certainly the series as a whole.