Skip to content
HomeUpcoming: THE BOOK OF THE NEW SUN by Gene Wolfe (Gollancz) 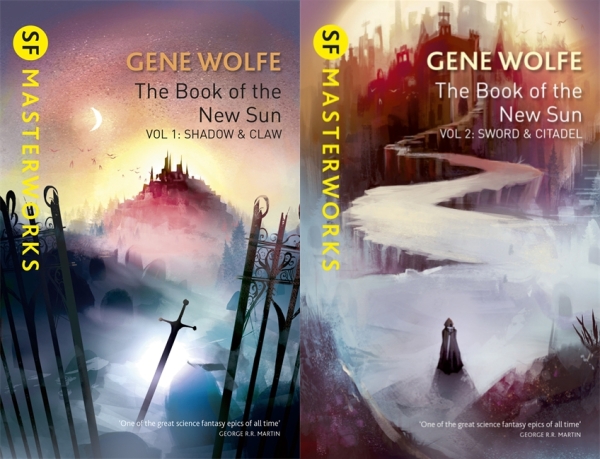 On November 10th, 2016, Gollancz are publishing new editions of Gene Wolfe‘s classic Book of the New Sun series. The series has completely new covers, and is collected into two volumes — Shadow and Claw and Sword and Citadel. Here’s the synopsis for the first book:

An extraordinary epic, set a million years in the future, in the time of a dying sun, when our present culture is no longer even a memory.

Severian, a torturer’s apprentice, is exiled from his guild after falling in love with one of his prisoners. Ordered to the distant city of Thrax, armed with his ancient executioner’s sword, Terminus Est, Severian must make his way across the perilous, ruined landscape of this far-future Urth. But is his finding of the mystical gem, the Claw of the Conciliator, merely an accident, or does Fate have a grander plans for Severian the torturer…?

Shadow & Claw collects The Shadow of the Torturer and The Claw of the Conciliator. Sword and Citadel collects The Sword of the Lictor and The Citadel of the Autarch. Each of the four novels that makes up the series is available as an individual eBook, too (click on the titles).

I’ve never read the series, despite it being recommend to me on multiple occasions. Maybe these new editions will be a nice way for me and a number of other new readers to try the series.