Welcome back to CR! For new readers, let’s start with an introduction: Who is Rjurik Davidson?

An Australian writer who spends a lot of time in Europe. A person who moves from place to place, from forest to desert, across all sorts of levels of society, from lawyers to party animals, from politicians to workers, from the ancient to the modern. Someone who knows that the most interesting things happen on the fault lines between worlds.

Your new novel, The Stars Askew, has recently been published by Tor. It looks fantastic: How would you introduce the series to a potential reader? And what can fans of the first novel expect from this new book?

First of all, The Stars Askew is an epic story about a revolution. As with all revolutions, it’s filled with dramatic events. The city of Caeli-Amur is in flux. Revolutionaries are in control, but enemies lurk in the shadows. One of the leaders is found murdered in the city’s baths with two thaumaturgists, also killed. Why were they killed? Kata, a former philosopher-assassin sets out to find the killer. That’s the start of the novel. From there stakes rise and rise. The novel features prison camps and Gorgons, lost towers in the wilderness and betrayal.

Are you an intelligent reader for whom books are ways of looking and experiencing at the world in a new way? Are you interested in big dramatic historical moments? Are you interested in the kinds of political questions the world is starting to ask of us in this century. How do we lead moral lives in a time of crisis? How do we face a world where democracy has withered away? How do we face hard choices that threaten to take away our humanity? What is love? Then this book is for you! It can be read on its own but it’s also a sequel to Unwrapped Sky. For those who have read Unwrapped Sky, the new novel takes the reader out of the city of Caeli-Amur, north to the vast metropolis of Varenis and also out into the wilderness and the mountains. It’s a big opening up into the world. There are quite a few more jokes too.

Any lessons learned – about writing, publishing – since writing your debut? Any surprises? 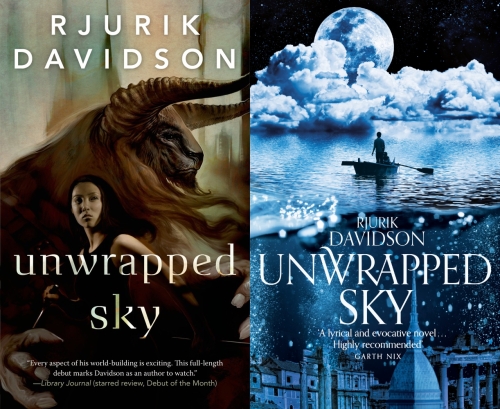 What are you working on at the moment?

I’m writing a YA novel. It’s a commercial thing. Sort of a YA Stepford Wives. It’s creepy and cool and fun. I’m also writing some more short stories. I’m returning to things which are fun and lively and not too intense (as the Caeli-Amur novels are). 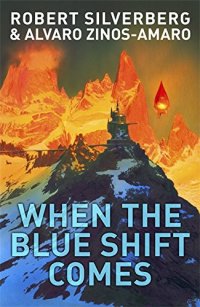 I’m reading Robert Silverberg and Alvaro Zimos-Amaro’s When the Blue Shift Comes. I’m a big fan of Silverberg’s, especially his extraordinary period from 1965-74. In fact, attentive readers will find echoes of his work in The Star Askew.

This is a collaboration, the first half written by one and the second by the other. I’ve just started, but it’s already caught my interest. I like to read things that surprise me. I don’t really understand the desire to read things that are familiar. Familiarity is for the imaginatively challenged.

I’d like to make it back to Europe. Exotic and strange as Australia is, if feels a long way away from the rest of the world. I’m also looking forward to writing a new epic fantasy, which I’ve started. It’s provisionally called The Broken City, but we’ll see if that name isn’t taken or if it sticks. Once I’m done with the YA book, that’s on the list.

Rjurik Davidson’s Unwrapped Sky and The Stars Askew are published in the US and UK by Tor Books. For more on the author’s writing and novels, be sure to check out his website, and follow him on Twitter and Goodreads.