Dave Hutchinson‘s third Europe novel is out this November! Due to be published by Solaris, Europe in Winter follows the critically-acclaimed, award-nominated Europe in Autumn and Europe at Midnight. Here’s the skinny:

A fractured Europe. A parallel world. A global threat.

Union has come. The Community is now the largest nation in Europe; trains run there from as far afield as London and Prague. It is an era of unprecedented peace and prosperity.

So what is the reason for a huge terrorist outrage? Why do the Community and Europe meet in secret, exchanging hostages? And who are Les Coureurs des Bois?

Along with a motley crew of strays and mafiosi and sleeper agents, Rudi sets out to answer these questions – only to discover that the truth lies both closer to home and farther away than anyone could possibly imagine.

Really looking forward to this. I need to do a binge-catch-up first, though — something I think I’ll try to do in April. I’ve heard only great things about the series. 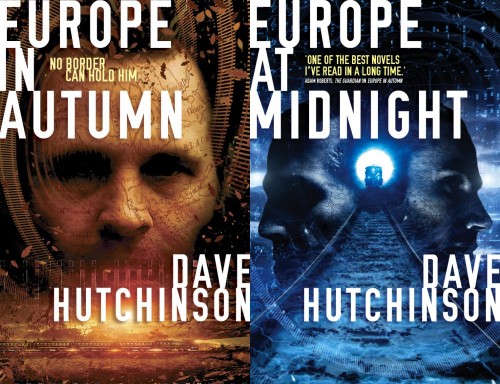