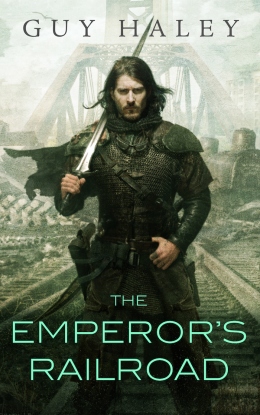 Global war devastated the environment, a zombie-like plague wiped out much of humanity, and civilization as we once understood it came to a standstill. But that was a thousand years ago, and the world is now a very different place.

Conflict between city states is constant, superstition is rife, and machine relics, mutant creatures and resurrected prehistoric beasts trouble the land. Watching over all are the silent Dreaming Cities. Homes of the angels, bastion outposts of heaven on Earth. Or so the church claims. Very few go in, and nobody ever comes out.

This is an interesting novella, and one that shows a lot of potential for expansion. (According to the author, it is first in a possible/planned series of stories.) The story is told from the perspective of Abney, one of the travellers to whom the knight on the cover attaches himself. The three are travelling cross-country: the mother and son are trying to reach Winfort, an outpost in which a distant relative lives. Quinn, the knight’s motivation is shrouded in mystery, and pretty much remains so at the end of the novella. This is no bad thing, as it gives us a little hint as to what we should expect from upcoming stories in this setting. Abney recounts their journey, and offers us an introduction to the setting and characters — we don’t get too much, but we start to see their characters take shape, and in the process some tantalizing hints about how the world got to this state.

The biggest surprise for me was that the railroad in the title was… pretty much absent from the story. Not strictly speaking a bad thing, but an odd decision, given the title. The story does, however, have angels, dragons and some excellent tension. It’s a somewhat slow-burn, and is clearly setting things up for future adventures. It’s pretty satisfying, though.

If you enjoy post-apocalyptic stories, then this is a must-read. Very good.

The Emperor’s Railroad is published by Tor.com in April 2016.