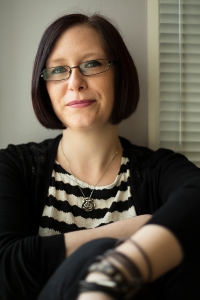 In The Iron Ghost, the second book in the Copper Cat trilogy, my very own troubled magic user Lord Aaron Frith comes face to face with one of the most famous mages’ in Ede’s history: the resurrected Joah Demonsworn. Unfortunately, although Joah is quite polite and rather pleased to find that there is at least one other mage still around, he is also murderously insane – driven beyond all sense by the pursuit of power, by his close association with a demon, and by spending a thousand years mouldering in a tomb. His plans for the Black Feather Three will prove to have disastrous consequences for everyone.

Magic is one of the foundations of fantasy, and often those who use it or are changed by it can be the most interesting characters in fiction. Here are a few of my favourites: 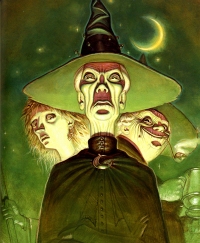 Almost any list where I have to name a favourite character will have Granny Weatherwax on it. When I was small, I was always drawn to stories with witches in – they were the bad guys, and they seemed to have strange appetites (dude, who makes a house out of sweets and then eats scrawny children?) but they were also powerful. Women in the stories I was exposed to rarely seemed to have any power of their own, but witches did. True, they paid for it by being feared and hated, but secretly I maintained an admiration for them, because I knew that witches were feared because they had a power other people (by which I mean, men) did not understand. Granny is the human face of that power. Like all of Pratchett’s best characters, she is someone we know in our bones straight away – the scary older relative who you don’t see very often, but is capable of giving you a single look that tells you that she knows exactly who broke the fancy vase and who has had their fingers in the jam. Granny Weatherwax is also incredibly powerful, which we know because she hardly ever shows it. Her finest moment for me, in my favourite Discworld novel Lords and Ladies, is when she sends her mind away with the bees to outwit the Elves – a feat previously thought impossible. She is independent, a total hard-ass, and has everyone’s best interests at heart. Granny Weatherwax is my hero. 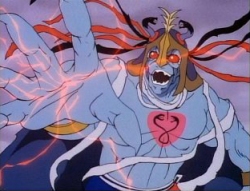 Mumm-Ra the Ever Living (from Thundercats)

Look, Mumm-Ra makes it on to this list through sheer bloody-minded persistence. There can’t be many magic users who use magic as endlessly as Mumm-Ra does. Every five minutes he is summoning the ancient spirits of evil from his pit of evil pink goo in order to either turn him into Mumm-ra the Alarmingly Buff and Gigantic, or to gain power for whatever faintly desperate scheme he has come up with this episode. He has, over the course of the series, turned himself into a fairy; a plant with a face that gives out drugged fruit; a pretend Thundercat cunningly named “Pumm-ra” (the Thundercats didn’t spot that one of course, trusting lot that they are); an evil Ro-Bear, and King Arthur. Or he uses the magic to summon creatures and figures from across time and space – a ninja, a samurai, a weird guy with a drill for legs… like you do. Truly, the ancient spirits of evil must be sick of it. I doubt they even manage a single quiet afternoon without Mumm-Ra summoning them for some bizarre favour. I have always been surprised that the ancient spirits of evil don’t set up some sort of answering service, so they could nip off down the pub for the night. ‘You have reached the ancient spirits of evil. We are not able to take your call at the moment. Leave a message after the beep, or press 2 for Ma-Mutt grooming services.’ Truly the hardest working magic user in fiction, yet Mumm-Ra never really achieves anything; the Thundercats continue to spend their days showing off their leotards and teasing Snarf. Take a day off, Mumm-Ra. Get out of the black pyramid for a bit and go and eat some candy-fruit. It’ll do you the world of good. 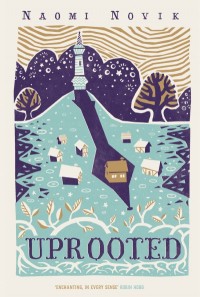 Agnieszka is my kind of witch. When the fearsome Dragon chooses a young woman to take back to his tower, she doesn’t expect to be chosen – her best friend, who is beautiful and capable and clever, is the obvious choice. But when she is taken, much to her horror and surprise, she pulls her socks up and gets on with it. She is frightened and she has a terrible time, but there is such an inner strength to Agnieszka, and such an incredible power to her own burgeoning abilities, that she is soon showing the Dragon a thing or two about using magic. Like Granny Weatherwax, she puts others before herself and uses everything she has to protect them – while when there is something she really wants, she will not hesitate to pursue it. She is clumsy and untidy and a mess in all sorts of ways, but her magic is a wild song, and indeed Uprooted contains one of the most beautiful depictions of magic I have ever read. More witches like Agnieszka, please.

Morrigan, an apostate mage with a ‘complicated’ relationship with her mother, is roped into helping your character early in the game, much to her unending disgust. She is voiced by the fabulous Claudia Black, which automatically gives her an edge over most magic users, and wears an oddly gravity defying feathers and bikini combo – but despite presumably being constantly quite chilly she still manages to be completely done with your shit at all times. Dragon Age is very much based around the idea that you, as the player, have to make lots of often quite difficult decisions and your various companions will agree or disagree with your actions to a certain degree. Morrigan nearly always hates everything you do, to the point where the ‘Morrigan Disapproves -10’ flag is a near permanent fixture of your gaming screen. Even so, you wouldn’t have it any other way – her relentless sarcasm and general dismay at everyone else in the world keeps you from taking yourself too seriously. Plus, she can turn herself into a giant spider – definitely someone you want on your side.

Jen Williams is a fantasy writer from the wilds of south-east London. She has an unhealthy obsession with Bioware games, enjoys a glass of mead, and takes Thundercats too seriously. The first two books in the Copper Cat trilogy, THE COPPER PROMISE and THE IRON GHOST, are available now, with the final volume, THE SILVER TIDE, coming in 2016. She is also the co-creator of Super Relaxed Fantasy Club, and is currently writing THE NINTH RAIN, the first book in a new fantasy trilogy also to be published by Headline.

3 thoughts on “Guest Post: “Magic & Its Masters” by Jen Williams”