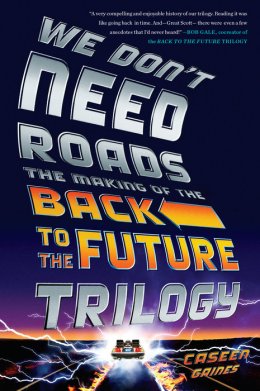 A behind-the-scenes look at the making of the wildly successful and beloved Back to the Future trilogy, just in time for the 30th anniversary

Long before Marty McFly and Doc Brown traveled through time in a flying DeLorean, director Robert Zemeckis, and his friend and writing partner Bob Gale, worked tirelessly to break into the industry with a hit. During their journey to realize their dream, they encountered unprecedented challenges and regularly took the difficult way out.

For the first time ever, the story of how these two young filmmakers struck lightning is being told by those who witnessed it. We Don’t Need Roads includes original interviews with Zemeckis, Gale, Christopher Lloyd, Lea Thompson, Huey Lewis, and over fifty others who contributed to one of the most popular and profitable film trilogies of all time.

With a focus not only on the movies, but also the lasting impact of the franchise and its fandom, We Don’t Need Roads is the ultimate read for anyone who has ever wanted to ride a Hoverboard, hang from the top of a clock tower, travel through the space-time continuum, or find out what really happened to Eric Stoltz after the first six weeks of filming. So, why don’t you make like a tree and get outta here – and start reading! We Don’t Need Roads is your density.

It’s always difficult writing reviews of histories like this (or many others), as one’s interest in the subject can often result in over-long recitations of what the author covers — thereby potentially negating the need for others to read it for themselves. That could very easily be the case with this book: there are so many great moments herein. Therefore, I’m going to keep this very short. First of all, We Don’t Need Roads is a very good book — it’s witty, exhaustive (despite its slim length), engaging, and clearly written from a place of affection. This is a must read for any fan of the franchise.

Gaines’s enthusiasm for the franchise comes through in every anecdote and accolade. However, the author does a very good job of keeping himself out of the story — he allows the words of those connected to the movies to tell the story (be they stars, directors, writers, producers, prop department staff, or any number of the myriad others involved). It makes for a very well-rounded history: there are those who are not so fond of the franchise (stars who were not asked back for parts two and three, for example; or a stunt performer injured during the shooting of part two). There are also conflicting memories of certain events and decisions, and Gaines presents all sides, offering the most common or consistent tales as most likely the truth. This is the story of, primarily, the creators and stars who took part — how the films shaped their careers, their obvious fondness for the movies and its writers and director.

There’s really not much more that needs to be said — it’s a great read. It will, also, really make you want to re-watch the trilogy (I wasn’t even halfway through reading it, when I went out and bought the trilogy on blu-ray). A fascinating book, about the trilogy and also filmmaking in general.