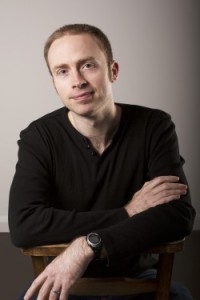 Let’s start with an introduction: Who is Peter Newman?

Peter Newman lives in Somerset with his wife and son. Growing up in and around London, Peter studied Drama and Education at the Central School of Speech and Drama, going on to work as a secondary school drama teacher. He now works as a trainer and Firewalking Instructor. He sometimes pretends to be a butler for the Tea and Jeopardy podcast, which he co-writes, and which has been shortlisted for a Hugo Award.

Your debut novel, The Vagrant, is due to be published this year by Voyager Books. How would you introduce it to a new reader? And is it part of a planned series?

A quick description would be: A silent figure wanders a far-future, post-demonic apocalypse, carrying humanity’s last hope. It features singing swords, demon knights, a baby and a goat.

It has been described recently (to my great delight) as: “A bit like China Mieville writing post-apocalyptic angelic knights.” A quote I’m sharing at every available opportunity!

The sequel will be out next year. [Possibly called The Malice – TBC]

What inspired you to write the novel? And where do you draw your inspirations from in general?

With The Vagrant the character literally turned up as I was trying to write a piece of short fiction and some years later [insert montage to make the long hours of typing very slowly appear sexier] I had a book!

In terms of influences, I’d say the book came out of a melting pot of my childhood fantasy reading, along with a few computer and roleplaying games, like Warhammer and Final Fantasy 7. 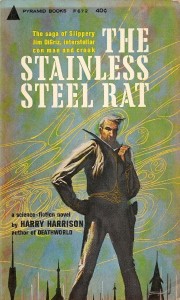 Via cartoons like He-Man and old black and white episodes of Flash Gordon. The first genre books I remember reading were the Stainless Steel Rat books by Harry Harrison. I read the Lord of the Rings trilogy aged eleven because the librarian said they were too old for me. Unfortunately, she was right and most of it went over my head! I went back and re-read them a few years later though (confession: I still skipped over all the songs). As a teenager, Dragonlance, Dune and Zelazny’s Amber books changed my life.

I love it! There always seems to be something else to look forward to, from the cover designs, to edits, to seeing your work in actual book form. At the moment I’m waiting to see who will blurb the book, and for all the lovely reviews to roll in. Did I mention that I’m an optimist?

I’m very lucky to be married to another writer. This means that I can bounce story ideas with Emma at the early stages, read scenes aloud to her as I go and have the benefit of her eye on the early draft. I tend to know my start and end point before I start writing a project and muddle my way through the middle, planning maybe a few scenes ahead of where I am. The other thing I’ve managed to do so far is to allow gaps between drafts to get the necessary distance for editing.

I first realised in my twenties and wrote a fair chunk of a novel based on a roleplaying game I was running… It was a mess of multiple first person POV’s but I seem to recall it had a good first line. In my naiveté I showed the first draft to friends before it was finished. Initial feedback wasn’t good and my poor ego took about ten years to recover.

I think fantasy is in a really good place right now (see question: ‘What are you reading at the moment’). It seems like there’s space for the grimmest and the darkest, the highest and silliest and lots in-between.

I’m editing the sequel to The Vagrant at the moment and I’ve got a new (secret) project that I’m about to start. It also contains demons.

I’m reading a lot of fantasy and alternating between series as I go. I’ve just finished The Iron Ghost by Jen Williams, and before that The Scarab Path by Adrian Tchaikovsky, and before that Joe Abercrombie’s The Heroes. They’re all fab books for very different reasons.

Probably that I’m a Firewalking instructor.

Launching the book! I can’t quite believe I’ll be signing copies actual copies of my actual book soon. I’m also looking forward to starting book three of Robin Hobb’s Farseer Trilogy. When I grow up I want to write like her.

The Vagrant is due to be published in the UK by Voyager books on April 23rd, 2015.

5 thoughts on “Interview with PETER NEWMAN”