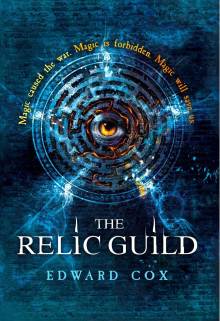 The first part in an exciting new fantasy trilogy

In the sealed Labyrinth, a young woman must find a way to control her magic and escape her prison in this remarkable debut fantasy.

Magic caused the war. Magic is forbidden. Magic will save us.

It was said the Labyrinth had once been the great meeting place, a sprawling city at the heart of an endless maze where a million humans hosted the Houses of the Aelfir. The Aelfir who had brought trade and riches, and a future full of promise. But when the Thaumaturgists, overlords of human and Aelfir alike, went to war, everything was ruined and the Labyrinth became an abandoned forbidden zone, where humans were trapped behind boundary walls 100 feet high.

Now the Aelfir are a distant memory and the Thaumaturgists have faded into myth. Young Clara struggles to survive in a dangerous and dysfunctional city, where eyes are keen, nights are long, and the use of magic is punishable by death. She hides in the shadows, fearful that someone will discover she is touched by magic. She knows her days are numbered. But when a strange man named Fabian Moor returns to the Labyrinth, Clara learns that magic serves a higher purpose and that some myths are much more deadly in the flesh.

The only people Clara can trust are the Relic Guild, a secret band of magickers sworn to protect the Labyrinth. But the Relic Guild are now too few. To truly defeat their old nemesis Moor, mightier help will be required. To save the Labyrinth – and the lives of one million humans – Clara and the Relic Guild must find a way to contact the worlds beyond their walls.

This is a fantastic debut, and one that worked for me on pretty much every level. I’ve now read two different versions of The Relic Guild. The first was an early draft, back in 2012. I don’t say this to brag.* But rather, because it was interesting to be able to see some of the process – issues were ironed out, and the novel improved considerably between the two versions. I really enjoyed this, and definitely think Cox is an author to watch. This is a great first installment, and a must-read of 2014.

The story, I thought, was very good. I was easily drawn in from very early on – not only because of the strength of the story, but also Cox’s writing and the atmosphere he brings to the telling. Cox has done a great job of twisting popular fantasy tropes to suit his own ends and, coupled with interesting world-building elements, magic and technology, he has created something rather excellent. It wasn’t the best novel for dipping in and out of frequently, though: I found it worked best if I could sit down and read it for extended periods of time, and really sink into it.

The characters are all well-rounded and varied — and, for me, are the stand out component of the novel. They are three-dimensional, engaging and very-well realized on the page. Their interactions are realistic, the dialogue felt natural and never contrived. In fact, that’s a good point about most of the novel – it doesn’t feel contrived (despite the obviously, sometimes extravagantly fantastical elements). I enjoyed the fact that the protagonists are presented in two different time periods, and that they feel genuinely like older or younger versions of themselves, and not just because we are told so (which I have read in other authors’ work). There is proper character development. The antagonists are appropriately… uh, antagonistic, and I liked the fact that the titular heroes are competent but not infallible, and sometimes entered into a rather gray area to achieve their ends. Perhaps the only thing I didn’t take to immediately was the name “Van Bam” (a minor niggle if ever there was one).

The Relic Guild is the first part of a trilogy, and the ending may well annoy many readers: it’s a cliffhanger, and we have about a year to wait for book two. I may have to bribe the author for an early read of the second in the series, tentatively titled The Cathedral of Known Things. Cox’s writing is assured and well-crafted, and he manages to avoid most debut traps. The world-building is quite detailed, but Cox manages to avoid info-dumping, thereby maintaining the momentum. The aesthetic and magic systems are a real melange of different SFF styles, offering a bit of everything — and it is a testament to Cox’s skills as a writer that they didn’t clash or create a mess. As a debut, one can always expect some dips, and The Relic Guild is no exception. However, here the dips in momentum are fleeting and didn’t derail my enjoyment of the story.

If you like your fantasy gothic (though not overly grimdark) in atmosphere, populated by interesting and varied characters, and a fast-but-not-rushed pace, then The Relic Guild is for you. I really enjoyed this, and can’t wait for the second in the series, and to see how the characters, world and story develop.

The Relic Guild is out now in the UK, published by Gollancz.