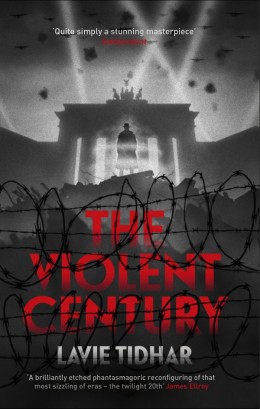 They’d never meant to be heroes.

For seventy years they’d guarded the British Empire. Oblivion and Fogg, inseparable at first, bound together by a shared fate. Until a night in Berlin, in the aftermath of the Second World War, and a secret that tore them apart.

But there must always be an account… and the past has a habit of catching up to the present.

Recalled to the Retirement Bureau from which no one can retire, Fogg and Oblivion must face up to a past of terrible war and unacknowledged heroism, a life of dusty corridors and secret rooms; of furtive meetings and blood-stained fields, to answer one last, impossible question: What makes a hero?

The Violent Century is, much to my shame, the first novel of Tidhar’s that I’ve read. And it’s quite the impressive accomplishment. Tidhar is not a stranger to pushing the envelope – see, for example, his World Fantasy Award-winning Osama – and in The Violent Century, he has created an original, engrossing fusion of noir-ish super-heroes and gritty espionage thriller. The publicity material that came with the ARC managed to capture it very well – “Watchmen meets John le Carre”. This is a very good novel.

The first thing that jumps out at you – after the tantalizing prologue – is the rather peculiar style Tidhar has chosen for the novel. It is unconventional, for sure. To begin with, it was a tricky thing to navigate. There are, for example, no speech-marks. It only took a couple of pages, though, before I got sucked in to the narrative. Not everyone is going to like Tidhar’s approach, and it isn’t quite consistent throughout (which did create a couple of moments that required a short re-read), but it is nevertheless a highly readable and accessible novel. The style is akin to a debriefing transcript, or a script narrative. Which, as it turns out, is quite appropriate.

The story involves the British department that deals with “super-heroes”, or the Übermenschen, who were created by a runaway science experiment. Fogg has been brought in to see the Old Man (the British Übermensch-handler, if you will), and explain some of his actions during the Second World War and Cold War. His partner of the time, Oblivion, is part of the discussion. Through Fogg’s debriefing, we learn about their work for the Allies and then against Soviet expansion. We see them at the start of their ‘careers’ as Übermenschen, some of their training at The Farm, and also their complex relationship (personal and working). We also learn about some of the ways in which the existence of super-powered soldiers has altered history. Things are not as different as one might believe, except in a few particulars. As the Old Man observes:

“We nullify each other, the Old Man says… Had there been Übermenschen on just one side, the Old Man says. If only the Nazis had them, for instance. Then the war could go a different way. But having them on every side nullifies the advantage. I’m afraid, gentlemen, that in this war, we are merely common soldiers.”

I very quickly got sucked in to the story. It has a wonderful, noir-ish feel, and it was easy to see how it might be adapted into graphic novel form. (Indeed, I think the art team who worked on Ed Brubaker’s original Captain America run, or Lee Bermejo would do a fantastic job of realising Tidhar’s story.)

The story is intimate, and we really get into Fogg’s head. The story jumps around in time a fair bit – the very short chapters could have given this a choppy, disjointed story, but it doesn’t read this way at all. I loved the way the author wove super-heroes (and -villains) into the history of the 20th Century. In addition, Tidhar gives Fogg, Oblivion, and a number of other Übermenschen we meet along the way, very introspective natures. There are as a result plenty of interesting examinations of how people with powers, who do not age, might feel and interact with the changing world around them – not to mention examinations of human nature and, as the synopsis asks, what makes a hero.

It’s a wonderfully atmospheric novel, one almost made for black-and-white film (especially the scene in the smoky bar, when Oblivion is reunited with and collects Fogg), or a graphic novel with plenty of sepia-tinged artwork. Tidhar has written a fantastic novel. It’s unconventional, but if you struggle with the style I urge you to stick with it – you’ll quickly get sucked in. I can’t wait to read Osama and anything else of his that I can get my hands on… Definitely recommended.

[Full-Disclosure: I currently work part-time for Tidhar’s Literary Agent, but received the ARC from Hodder.]

One thought on “Review: THE VIOLENT CENTURY by Lavie Tidhar (Hodder)”