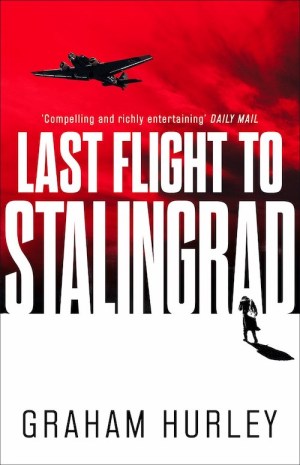 With Last Flight to Stalingrad, Graham Hurley continues his Spoils of War series of World War II related novels. Each of which seems to be a stand-alone, so I don’t think they need to be read in order. This one caught my attention, and I’m looking forward to reading it soon. Head of Zeus were kind enough to provide an excerpt to share with CR readers. Here’s the synopsis:

For four years, the men in field grey have helped themselves to country after country across Western Europe.

For Werner Nehmann, a journalist at the Promi – the Ministry of Propaganda – this dizzying series of victories has felt like a party without end. But now the Reich’s attention has turned towards the East, and as winter sets in, the mood is turning.

Werner’s boss, Joseph Goebbels, can sense it. A small man with a powerful voice and coal-black eyes, Goebbels has a deep understanding of the dark arts of manipulation. His words, his newsreels, have shaken Germany awake, propelling it towards its greater destiny and he won’t let – he can’t let – morale falter now. But the Minister of Propaganda is uneasy and in his discomfort has pulled Werner into his close confidence.

And here, amid the power struggle between the Nazi Chieftains, Werner will make his mistake and begin his descent into the hell of Stalingrad…

Now, on with the excerpt…

END_OF_DOCUMENT_TOKEN_TO_BE_REPLACED

I’ve been reading a lot of German history for work, this year. Starting from the formation of a unified Germany, and stretching to the end of the Cold War, it’s been an interesting exercise. I’m always on the look-out for new books that offer something slightly different to recommend to students and others who might be interested. There are, of course, entire libraries available covering Hitler’s rise and WW2. Many of these books follow a similar approach, which is fine but a tad repetitive. So, when I spotted David McKean‘s Watching Darkness Fall on Edelweiss, it caught my attention: it is an account of FDR’s ambassadors in Europe’s response to Hitler’s rise. I’m really looking forward to reading this. Here’s the synopsis:

The story of how the United States government underestimated the deadly rise of fascism before World War II.

As German tanks rolled toward Paris in late May 1940, the U.S. Ambassador to France, William Bullitt, was determined to stay put, holed up in the Chateau St. Firmin in Chantilly, his country residence. Bullitt told the president that he would neither evacuate the embassy nor his chateau, an eighteenth Renaissance manse with a wine cellar of over 18,000 bottles, even though “we have only two revolvers in this entire mission with only forty bullets.”

Watching Darkness Fall will recount the rise of the Third Reich in Germany and the road to war from the perspective of five American diplomats in Europe who witnessed it firsthand: Joseph Kennedy, William Dodd, Breckinridge Long, William Bullitt, and George Kennan, who all served in key Western European capitals — London, Berlin, Rome, Paris, and Moscow — in the years prior to World War II. In many ways they were America’s first line of defense and they often communicated with the president directly, as Roosevelt’s eyes and ears on the ground. Unfortunately, most of them underestimated the power and resolve of Adolph Hitler and Germany’s Third Reich.

Watching Darkness Fall is a gripping new history of the years leading up to and the beginning of WWII in Europe told through the lives of five well-educated and mostly wealthy men all vying for the attention of the man in the Oval Office.

David McKean’s Watching Darkness Fall is due to be published by St. Martin’s Press in North America and in the UK, on November 2nd, 2021.