An inside look at the season that proved to be the final ride of a truly great dynasty — Kobe Bryant, Shaq, and the LA Lakers

For the countless basketball fans who were spellbound by the Los Angeles Lakers’ 2003-2004 high-wire act, this book is a rare and phenomenal treat. In The Last Season, Lakers coach Phil Jackson draws on his trademark honesty and insight to tell the whole story of the season that proved to be the final ride of a truly great dynasty. From the signing of future Hall-of-Famers Karl Malone and Gary Payton to the Kobe Bryant rape case/media circus, this is a riveting tale of clashing egos, public feuds, contract disputes, and team meltdowns that only a coach, and a writer, of Jackson’s candor, experience, and ability could tell. Full of tremendous human drama and offering lessons on coaching and on life, this is a book that no sports fan can possibly pass up.

I recently read Jeff Pearlman’s excellent, entertaining Three-Ring Circus: an account of the LA Lakers’ three-championship run in the early 2000s. Coached by Phil Jackson and led by Shaquille O’Neal and Kobe Bryant, the team was dominant, impressive to watch, and dysfunctional. Pearlman’s book is a warts-and-all, humorous examination of the team and the characters that comprised it. I wanted to read more about the team and the NBA of that time, so I picked up Jackson’s memoir of his the 2003-4 season. What I found was an interesting, informative, and engaging read. END_OF_DOCUMENT_TOKEN_TO_BE_REPLACED 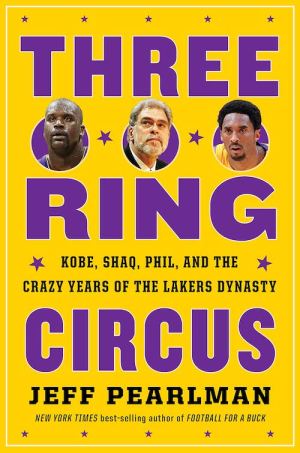 An amusing, irreverent account of the Lakers of Kobe, Shaq, and Phil Jackson

The story of the Lakers dynasty from 1996 through 2004, when Kobe Bryant and Shaquille O’Neal combined — and collided — to help bring the Lakers three straight championships and restore the franchise as a powerhouse

In the history of modern sport, there have never been two high-level teammates who loathed each other the way Shaquille O’Neal loathed Kobe Bryant, and Kobe Bryant loathed Shaquille O’Neal. From public sniping and sparring, to physical altercations and the repeated threats of trade, it was warfare. And yet, despite eight years of infighting and hostility, by turns mediated and encouraged by coach Phil Jackson, the Shaq-Kobe duo resulted in one of the greatest dynasties in NBA history. Together, the two led the Lakers to three straight championships and returned glory and excitement to Los Angeles.

I’m not sure I can remember a time when I didn’t know the names “Kobe Bryant” and, especially, “Shaquille O’Neal”. This despite not having access to NBA games (in person or on TV) until Kobe’s final year in the League, and after Shaq had retired. I knew they’d won the championship together at least twice, but that was it. When Pearlman’s Three-Ring Circus popped up on my radar, I knew I had to read it. And I’m very glad I did: it’s a detailed, irreverent and (seemingly) balanced account of the tense years leading up to and including the Lakers’ three-peat. I really enjoyed it. END_OF_DOCUMENT_TOKEN_TO_BE_REPLACED