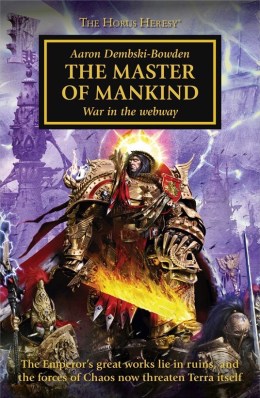 The battle for the Webway

While Horus’ rebellion burns across the galaxy, a very different kind of war rages beneath the Imperial Palace. The ‘Ten Thousand’ Custodian Guard, along with the Sisters of Silence and the Mechanicum forces of Fabricator General Kane, fight to control the nexus points of the ancient eldar webway that lie closest to Terra, infested by daemonic entities after Magnus the Red’s intrusion. But with traitor legionaries and corrupted Battle Titans now counted among the forces of Chaos, the noose around the Throneworld is tightening, and none but the Emperor Himself can hope to prevail.

This was probably one of my most-anticipated novels of the year. Each of Aaron Dembski-Bowden’s contributions to the ever-expanding Horus Heresy mythos to date has been superb: The First Heretic and Betrayer are particularly stand-out novels in an overall-excellent series. So, when it was first announced that Mr. D-B would be taking on the story of the Emperor himself…? Well, how could I not be excited? Unfortunately, this novel didn’t work for me on almost every level. END_OF_DOCUMENT_TOKEN_TO_BE_REPLACED