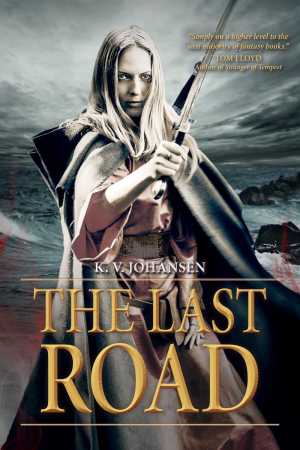 The Last Road is the fifth and final novel of Gods of the Caravan Road, and although the other novels in the series can be read alone (counting The Leopard and The Lady as one book, Marakand, in two volumes) it’s written assuming that the reader has at least read Blackdog. You could probably get by piecing together supposition about Ahjvar, Ghu, and Yeh-Lin from the middle books, but you need to know Moth and Mikki and Holla-Sayan. However, they aren’t the people they were at the end of Blackdog. This is almost two centuries later. Their world has changed and so have they.

I’m very excited — make that, very nervous — to be offering this up to you at last.

When even the gods are dying, the hope of the world may lie in its most feared enemies. A new god proclaimed as the All-Holy has arisen in the west and leads an army eastward, devouring the gods and goddesses of the lands between, forcibly converting their folk and binding their souls to himself. The very fabric of the world appears threatened by forces beyond the understanding of scholars and wizards alike. Even the great city of Marakand, where the roads of east and west converge, seems powerless to resist the All-Holy, though the devils Moth and Yeh-Lin and the assassin Ahjvar, undead consort of the god of distant Nabban, have come to stand with it. That may avail Marakand little, for the shapeshifting Blackdog, once a champion of the gods, follows obediently at the All-Holy’s heel and Lakkariss, the sword of the cold hells, is in his master’s hand.

END_OF_DOCUMENT_TOKEN_TO_BE_REPLACED 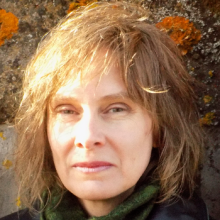 The books of Gods of the Caravan Road have several central protagonists: Holla-Sayan in Blackdog, Holla, Ivah, Ahjvar, and Ghu, in The Leopard and The Lady, then Ivah and Ahjvar and Ghu in Gods of Nabban. However, the character to whom the series as a whole belongs is Moth, the devil Ulfhild Vartu. With the half-demon wer-bear Mikki at her side, she begins it, in “The Storyteller,” acquiring the black sword Lakkariss from the Old Great Gods in order to avenge her brother and Mikki’s mother on her cousin and former ally, Heuslar Ogada. She ends it, standing at the centre of events in The Last Road. In between, she and Mikki wander in and out of the others’ tales, with Moth, at least, avoiding ever becoming too close to any of them, even Ivah, in whom she sees perhaps an echo of her own lost daughter, but strongly, of herself. END_OF_DOCUMENT_TOKEN_TO_BE_REPLACED 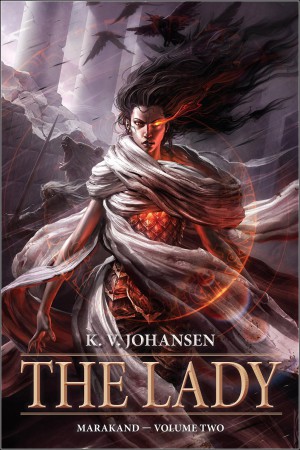 THE LADY, the second novel in K.V. Johansen‘s two-part Marakand series, is published today by Pyr Books. To celebrate the release, and just in case you weren’t aware of the novel (or series), here’s the first chapter to whet your appetite…

The man had been like an older brother to him ever since his parents had got him hired into the caravan-mistress Gaguush’s gang, but sometimes Zavel could hate the self-righteous bastard of a Westgrasslander. Like now. All he had wanted was the loan of a few coins, but no, he got a tongue-lashing instead. As if Holla-Sayan had never had a drink or two more than sat well the next morning, or gone with an easy woman. And if that wasn’t what he was up to now, skulking down the street with his eyes running anxiously to those two slim figures who’d walked ahead and were now waiting arm in arm, a Grasslander caravaneer with the long braids of the road and another with her Nabbani-black hair cut short as a Marakander boy’s. That one looked around, wondering where her victim had got to.

Zavel had Holla-Sayan by the arm, stopping the man just walking off on him, and now he dug in his fingers. Gaped wordless a moment. Couldn’t be. And Holla had been right with them, a hand under the Nabbani’s elbow, all friendly, when Zavel had spotted the threesome, the Westgrasslander and the two women, one of whom was—Ivah. The past year hadn’t treated her well. She was gaunt and pallid, but cutting her long hair was no disguise at all; he knew the sly narrow eyes, yellow brown as his own, the delicate features and tight little mouth, bruised black as it was. She knew him, too. He saw her eyes widen in shock, and damn if she didn’t look to Holla-Sayan in some appeal.

“Holla!” He let go Holla-Sayan’s arm, pushed away from him. “Ivah! You murdering, bastard whore of the Lake-Lord, you—” His knife was in his hand and he leapt for her, reaching to grab her by the front of her coat, to jerk her close and into the stabbing blade, but he choked, jerked backwards himself by the hood of his coat, Holla, damn him, and he spun around, slashing. Holla-Sayan knocked his arm aside and a fist hit his jaw. He heard the thud of it, felt the jarring clack of his teeth. Then nothing. END_OF_DOCUMENT_TOKEN_TO_BE_REPLACED