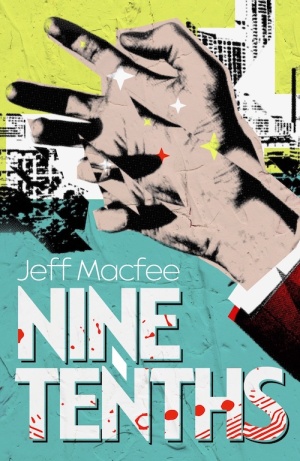 Today we have an excerpt from Jeff Macfee‘s new novel, Nine Tenths. A blend of mystery and science fiction, here’s the synopsis:

It was the date of the Doctor Dimension repo.

In a world full of “Augments” — humans who use technology to imbue themselves with superpowers of every sort — being an average man would seem a good way to keep out of trouble. Not so for repo man Gayle Harwood. It’s his job to seize enhancements from Augments who fall behind on the payments for their high-tech advantages. And they rarely part with them easily.

Now an infamous job Gayle was a part of long ago has come back to haunt him. An incredibly powerful piece of tech that was supposed to have been turned over to the government is being used again. People are dying, and those in power are convinced Gayle knows something about it.

And unless Gayle can uncover the sinister secrets of the past and find whoever has hijacked the lost tech and stop them, no superpower in the world is going to be enough to save him…