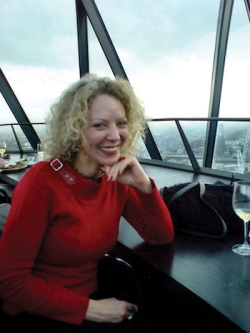 Welcome back to CR! For new readers, let’s start with an introduction: Who is Gaie Sebold?

I never quite know how to answer this question in a way that doesn’t sound dreadfully dull! I’m a married fantasy writer with a cat. I used to do some interesting things and then middle age — not to mention the pandemic — happened. Now I mostly sit at a desk. I have been known to perform poetry to an audience, and run around in a wood with a latex sword, or a gym with a wooden one. I grow vegetables and cook.  That’s me.

Your debut novel, Bad Gods (originally titled Babylon Steel), is due to be re-issued by Solaris, in January. I really enjoyed it when it was first published, but for new-/latecomers: How would you introduce it to a potential reader? Is it part of a series?

It’s about a woman who runs a brothel, in a city connected by a series of portals to various planes. She gets hired to find a missing person case and also tracks down a serial killer while avoiding her own past. It has occasional sexy bits and more than occasional funny bits and quite frequent serious bits. It’s the first in what is currently a two book series, which I hope may be extended. END_OF_DOCUMENT_TOKEN_TO_BE_REPLACED