Even as the Imperium faces the renegade Legions of the Warmaster, the ruling Council of Terra is becoming paralysed from within by increasingly petty bureaucracy. Fabricator General Kane has seen his fellow Mechanicum adepts dismissed again and again by the High Lords – with his traitorous predecessor Kelbor-Hal still at large on the Red Planet, the political status of the tech-priesthood remains ambiguous. New alliances must be forged from the old, if Mars and Terra are to survive the final battle.

This was pretty cool. I wasn’t sure what to expect, not usually going for titan-focused fiction. The first thing one notices is the quality of the production: an excellent, fairly large cast, all of whom deliver great performances; and the plentiful, good sound-effects and music do a great job of enhancing, not distracting from the story. (This is a real strength of BL’s audio-dramas in general.) I think the only things that took some getting used to were the voices of the members of the Mechanicum — a couple were so tech-distorted that they came across like irate Daleks. It does fit, though.

As for the story? Very good. I enjoyed seeing the politics behind the Mechanicum, as they maneuvered for better status among the High Lords. The characters are interesting, their interactions realistic even if they themselves are so (mechanically) alien. I’d certainly be interested in listening to more audio-dramas featuring them, or reading about them in ‘regular’ fiction formats.

If you’re a fan of the Horus Heresy series (especially the Mechanicum-related fiction), then I’d certainly recommend this. A very good Black Library audio-drama.

The Binary Succession is out now, published by Black Library.

Also on CR: Interview with David Annandale (2012); Guest Post on “My Favourite Novel”; Reviews of The Carrion Anthem, The Damnation of Pythos 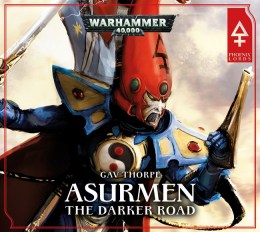 It is said the Phoenix Lords arrive on the eve of great moments… Guided by fate, Asurmen the Hand of Asuryan comes to the craftworld of Ulthwé. At the behest of the head of the seer council, he joins the warriors of Ulthwé and the young seer Eldrad on a quest to the Crone Worlds in search of the oracle Hiron-athela. It is believed that this being holds an artefact that could safeguard Ulthwé’s future, but in order to obtain it the eldar must travel a dark road…

I keep forgetting to read Asurmen: The Hand of Asuryan, which I’ve had for years. The Eldar were the first WH40k army I thought was interesting. I remember reading the Codex multiple times, back in the day, and the Phoenix Lords in particular caught my imagination and attention. The Darker Road is a really interesting short story, and I enjoyed seeing how the Elder “work” together. Thorpe’s done a great job of writing interesting, alien characters who are nevertheless relatable. He includes plenty of Eldar-traits, without info-dumping, as well as some good Chaos shenanigans.

As in The Binary Succession, though, there were times when the voices came across as a little too-techno-distorted (for my taste). Not a major issue, but I think it could have been toned down a bit without ruining the story.

If you’re a fan of the Elder, then I highly recommend you check out this audio-drama. Interesting, well-performed. It also reignited my interest in reading The Hand of Asuryan. The second novel in the Phoenix Lords series, Jain Zar: The Storm of Silence, is due out in May 2017.

Asurmen: The Darker Road is out now, published by Black Library.

Also on CR: Interviews with Gav Thorpe — 2011 and 2016; Reviews of The Curse of Khaine, Deliverance Lost, Angels of Caliban 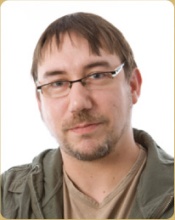 Let’s start with an introduction: Who is Gav Thorpe?

Hi, I’m a middle aged white guy that’s been fortunate enough to write about orcs and space marines and other made-up stuff since I was nineteen. I spent fourteen years as a games develop for Games Workshop, and in 2007 I left to become a full-time freelance writer, developer and creative consultant.

I live between Nottingham and Derby in the UK, with by partner Kez and our son, Sammy.

You work on a number of series for Black Library. Your next Horus Heresy novel, Angels of Caliban, will be published soon(ish). How would you introduce it to a potential reader?

Angels of Caliban is a story about loyalty and honour, but more importantly how those things can be measured differently. And how those measures may change depending on circumstance. It is the culmination and continuance of several storylines that have been playing out through the Horus Heresy series, including the Imperium Secundus arc, the growing rebellion on Caliban and the ongoing homicidal feud between The Lion and Konrad Curze. But there’s also a ton of stuff about the history and organisation of the Dark Angels legion, an examination on the ‘nature versus nurture’ debate on the Primarchs and all the sort of lore you would expect from a Horus Heresy novel. Oh, and an ending that will drop a few jaws and have some folks just wondering what the hell is going to happen next. END_OF_DOCUMENT_TOKEN_TO_BE_REPLACED