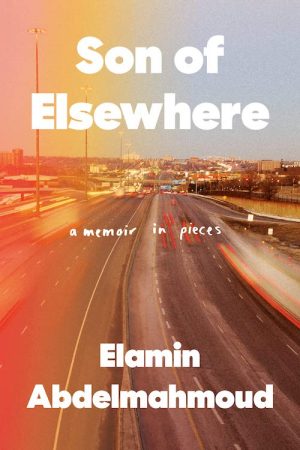 I first heard of Elamin Abdelmahmoud‘s upcoming memoir, Son of Elsewhere via Twitter — as is so often the case, I’ve forgotten who it was who Tweeted about it, or re-tweeted a mention. Regardless, my attention was grabbed by the Canadian cover and interest further piqued by the synopsis. As a relatively new Canadian myself, I’m also interested in reading about other people’s immigrant experiences here. Really looking forward to reading this. Check out the synopsis:

From one of the most beloved media personalities of his generation comes a one-of-a-kind reflection on Blackness, faith, language, pop culture, and the challenges and rewards of finding your way in the world.

Professional wrestling super fandom, Ontario’s endlessly unfurling 401 highway, late nights at the convenience store listening to heavy metal — for writer and podcast host Elamin Abdelmahmoud, these are the building blocks of a life. Son of Elsewhere charts that life in wise, funny, and moving reflections on the many threads that weave together into an identity. 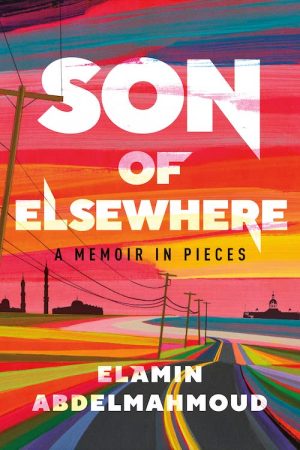 Arriving in Canada at age 12 from Sudan, Elamin’s teenage years were spent trying on new ways of being in the world, new ways of relating to his almost universally white peers. His isa story of yearning to belong in a time and place where expectation and assumptions around race, faith, language, and origin make such belonging extremely difficult, but it’s also a story of the surprising and unexpected ways in which connection and acceptance can be found.

In this extraordinary debut collection, the process of growing — of trying, failing, and trying again to fit in — is cast against the backdrop of the memory of life in a different time, and different place — a Khartoum being bombed by the United States, a nation seeking to define and understand itself against global powers of infinite reach.

Taken together, these essays explore how we pick and choose from our experience and environment to help us in the ongoing project of defining who we are — how, for instance, the example of Mo Salah, the profound grief practices of Islam, the nerdy charm of The O.C.’s Seth Cohen, and the long shadow of colonialism can cohere into a new and powerful whole.

With the perfect balance of relatable humor and intellectual ferocity, Son of Elsewhere confronts what we know about ourselves, and most important, what we’re still learning.

Elamin Abdelmahmoud’s Son of Elsewhere is due to be published on May 17th by McClellan & Stewart in Canada, and Ballantine Books in the US. (At the time of writing, I couldn’t find any information about a UK edition.)