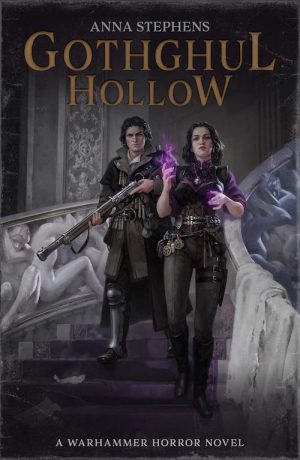 Anna Stephens is perhaps best known for her Godblind Trilogy and latest novel, The Stone Knife. The author has also been writing a fair number of short stories for Black Library, and next year her first will arrive: Gothgul Hollow is part of the publisher’s Warhammer Horror series. Set in the Age of Sigmar, I’m rather looking forward to reading this. You can read a little bit more about it (and some other upcoming Warhammer Horror titles, here.)

The Hollow. A lonely Shyishan town, obscured amongst wild moorland, inhabited by folk of vigilant routine. What remains of the once illustrious Gothghul family endures season upon season of monastic isolation in their castle on the hill. Aaric Gothghul, made callous by loss, shuts himself in his study and broods over arcane texts, while his strange and formidable daughter wanders the forests alone.

But when the town is threatened by a spate of sinister manifestations, the quiet formality of their days end. Worse still, the upheaval disturbs a terrible family secret – a chilling memory that Aaric has kept buried for twenty-five years. Now, father and daughter must set aside their differences and search for answers to an ancient curse that is somehow linked to their past. Aided by a straight-talking sharpshooter and a shrewd man of faith, they seek to fathom the forces that assail the Hollow.

Scholar. Sorceress. Killer. Priest. Four people divided by their secrets and lies, bound together by horror, must unite their strengths to uncover a diabolic mystery – the clue to which they have but one incomprehensible word: Mhurghast.

Gothgul Hollow is due to be published by Black Library in North America and in the UK, in February 2022.