The new cover for Cameron Johnston‘s upcoming new novel, The Maleficent Seven, was revealed today on Tor.com. I think you’ll agree that it’s pretty awesome. The synopsis gave off a vibe similar to that for Ari Marmell’s The Conqueror’s Shadow (which I really enjoyed). I’m really looking forward to trying this one. Here’s the synopsis:

When you are all out of heroes, all that’s left are the villains.

Black Herran was a dread demonologist, and the most ruthless general in all Essoran. She assembled the six most fearsome warriors to captain her armies: a necromancer, a vampire lord, a demigod, an orcish warleader, a pirate queen, and a twisted alchemist. Together they brought the whole continent to its knees… Until the day she abandoned her army, on the eve of total victory.

40 years later, she must bring her former captains back together for one final stand, in the small town of Tarnbrooke — the last bastion against a fanatical new enemy tearing through the land, intent on finishing the job Black Herran started years before.

Cameron Johnston’s The Maleficent Seven is due to be published by Angry Robot Books in North America and in the UK, on August 10th, 2021.

This post was originally written in January, and included the novel’s ARC cover. I really liked that one, too, so here it is: 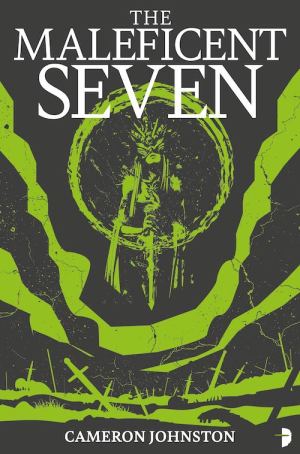