Skip to content
HomeQuick Review: THE WORDS OF EVERY SONG by Liz Moore (Windmill/Broadway)

An interlinked tour through the New York music industry, and some of the lives it intersects with…

The Words of Every Song takes the form of fourteen linked episodes, each centering on a character involved with the music industry. There’s the arrogantly hip, twenty-six-year-old A&R man; the rising young singer-songwriter; the established, arena-filling rock star on the verge of a midlife crisis; the type-A female executive with the heavy social calendar; and other recognizable figures.

Set in the sleek offices, high-tech recording studios, and grungy downtown clubs of New York, The Words of Every Song offers an authenticity drawn from Liz Moore’s own experience and brings an insider’s touch to its depiction of the music industry and its denizens.

Liz Moore’s The Words of Every Song takes readers on a trip through the contemporary music industry, as witnessed through the eyes and lives of a mixed cast of characters. Each of these episodes is linked with at least one of the others, and is an interesting collection of character studies. I enjoyed this.

The novel does an excellent job of highlighting its characters’ inner and public lives. A&R man Theo Brigham, on a bit of a cold streak, not signing many new clients, but on the look-out for something new. He pins his hopes on a new band — he likes them, but he’s not convinced that enough others will to make them a hit for his label, Titan Records. We read about the demanding and cold label boss, Jax Powers-Kline, whose underlings live on tenterhooks, hiding her anxiety and tension from those around her. As she interacts with her employees, artists, and family, she wonders if she’s sacrificed too much of herself for success, power, and all the trappings that come with it. Tommy Mays, the rock star who’s tired of touring, and would much rather stay home with his family. He is sick of the “rock star” life, depressed and disgusted by the hedonistic tendencies of some of his bandmates, and sick of singing songs he stopped liking years ago (but, they keep the punters coming out, so he keeps playing them). The journalist who starts off rather pretentious, aloof from the frivolity of the music business and this band he’s reviewing. But his preconceived notions of the band and genre are shed as he falls for their singer. We also meet a young rapper and producer at college, who has an incredible positivity and luck, a zest for life and confidence that he’ll make it if he keeps hustling. There’s a young girl group on their first audition, worrying about their looks and clothes, and an overbearing parent-manager. We read of young fans who find themselves in the presence of their idols, but also in unsafe situations they feel they can’t escape. 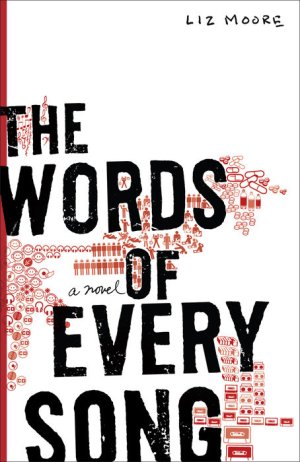 Each chapter/episode gives us a look into not only these characters’ lives, worries and secret hopes, but also offers some good commentary (albeit rarely explicit) of the industry and its expectations. Why, for example, are teenage girls expected to know how to dance sexily? How do artists navigate the industry’s (and society’s) addiction to the new and young? How much are you willing to sacrifice to make it? How can you balance the relentless demands of the industry with your family, and desire to have a life of your own? How to family members handle being on the edge of the industry, whether related to successful artists or hopeful up-and-comers? The novel does a very good job of dissecting the industry — what it demands, what it can give, but also what it can take.

Moore’s writing is excellent. Nicely composed, devoid of excessive description, readers are pulled on through the story at a good pace — it’s by no means rushed, but progresses at just the right clip. The author’s characters are very well crafted, and quickly come to life on the page. With the introduction of each new perspective, we get a good picture of their personality very quickly. In fact, this is the rare novel when I didn’t have a clear favourite POV character — each felt fully realized on the page, and I would have liked to have spent more time with each of them. Unlike the author’s latest novel, Long Bright River, there’s also regular punctuation and dialogue. (An affectation that has rarely landed for me.)

So, if you’re looking for a very well written, character-led story, then I’d certainly recommend The Words of Every Song. It’s a novel of life: its hopes, hardships, anxieties, joys, and struggles.

Liz Moore’s The Words of Every Song is out now in the UK eBook (paperback out in June 2021), published by Windmill Books. The novel is published in North America by Broadway Books.