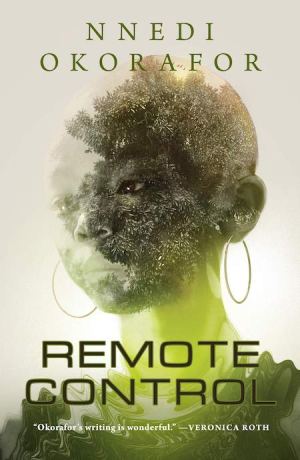 An intriguing novella about belonging, community, and what drives us

“She’s the adopted daughter of the Angel of Death. Beware of her. Mind her. Death guards her like one of its own.”

The day Fatima forgot her name, Death paid a visit. From hereon in she would be known as Sankofa — a name that meant nothing to anyone but her, the only tie to her family and her past.

Her touch is death, and with a glance a town can fall. And she walks — alone, except for her fox companion — searching for the object that came from the sky and gave itself to her when the meteors fell and when she was yet unchanged; searching for answers.

But is there a greater purpose for Sankofa, now that Death is her constant companion?

I’ve been a fan of Nnedi Okorafor’s work since Lagoon. Since then, I’ve always kept my eyes open for new fiction by the author. I’m happy to report that Remote Control is an excellent sci-fi novella, and I really enjoyed reading it.

Remote Control is an Afrofuturist novella set in a near future — everyone is even more connected than they are today, robotics have advanced, and corporations still have too much power over the communities in which they operate. Much of this is just the background of the story, however: the book very much focuses on Sankofa’s experiences, and her long, unrelenting quest to recover what was stolen from her.

Okorafor’s writing is excellent, as expected. From descriptions to dialogue, the author gives readers everything they need. The description is often minimal, but always evocative and interesting. Each character, whether Sankofa or mere bit players, is well-drawn and easily imagined.

Sankofa’s nature is never fully explained, but readers are given hints and more details throughout the novella. I thought this worked very well, because Sankofa herself is not aware of how or why she became changed. She’s a gentle soul suddenly imbued with a deadly power that she is not fully in control of.

As we follow Sankofa on her quest, you really feel for her — she is separated from society and the communities she travels to and through by her nature and her power. The myth that arises in her wake and precedes her journey alternates between positive and negative — some paint her as an angel of mercy, while others see her as a bad omen and evil. In each new community she arrives at, people quickly know who she is. Sometimes, she’s met with incredible generosity — given warily, however. She often plays the role of medieval “witch”: turned to when help is needed, but quickly and easily turned against if anything goes wrong. We learn of her desire for connection, her continued wariness of others and her not-entirely-under-control abilities.

If you’re looking for a near-future sci-fi novel with a difference, than I would definitely recommend Remote Control. I really enjoyed this.

Nnedi Okorafor’s Remote Control is due to be published by Tor.com in North America and in the UK, on January 19th, 2021.