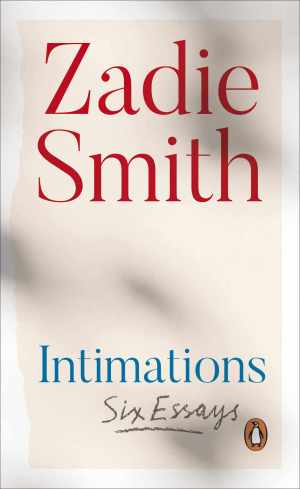 A superb collection of short essays

Deeply personal and powerfully moving, a short and timely series of essays on the experience of lock down, by one of the most clear-sighted and essential writers of our time

“There will be many books written about the year 2020: historical, analytic, political and comprehensive accounts. This is not any of those — the year isn’t half-way done. What I’ve tried to do is organize some of the feelings and thoughts that events, so far, have provoked in me, in those scraps of time the year itself has allowed. These are above all personal essays: small by definition, short by necessity.”

Crafted with the sharp intelligence, wit, and style that have won Zadie Smith millions of fans, and suffused with a profound intimacy and tenderness in response to these unprecedented times, Intimations is a vital work of art, a gesture of connection, and an act of love — an essential book in extraordinary times.

Intimations, Zadie Smith’s new non-fiction collection, includes six fantastic essays that are observant, generous, sometimes wry, passionate, and always engaging. While some of them look at life as the COVID-19 pandemic started to take hold, it is not a book specifically about the pandemic. It is an engaging read throughout. I really enjoyed this.

The essays in this collection are quite far-ranging — from Smith’s thoughts about writing as a creative pursuit (more an exercise of “control” than “creativity”) and her endearing tendency to pick relaxing pursuits that allow her the time to keep reading; Trump’s incompetent response to the COVID-19 pandemic; the cruel inadequacies and failures (and racism) of the American healthcare system; the exuberance of her young students, coupled with a surprising early cynicism for their prospects post-college. In each case, the author provides incisive observations, kind portraits of others, and passionate critiques of injustice.

At one point, the author writes about death in contemporary America, how it is connected to not only the broken healthcare system, but also policing, COVID-19, financial inequality, and more.

… in America, all of these involved some culpability on the part of the dead. Wrong place, wrong time. Wrong skin color. Wrong side of the tracks. Wrong Zip Code, wrong beliefs, wrong city. Wrong position of hands when asked to exit the vehicle. Wrong health insurance—or none. Wrong attitude to the police officer…. America has rarely been philosophically inclined to consider existence as a whole, preferring instead to attack death as a series of discrete problems. Wars on drugs, cancer, poverty, and so on. Not that there is anything ridiculous about trying to lengthen the distance between the dates on our birth certificates and the ones on our tombstones: ethical life depends on the meaningfulness of that effort. But perhaps nowhere in the world has this effort—and its relative success—been linked so emphatically to money as it is in America.

One of the things that really jumped out at me while reading these essays is Smith’s generosity and willingness to share moments when her own expectations were challenged or proven incorrect. There are a few moments when the author recognizes that her assumptions and concerns were disconnected from her fellow New Yorkers, how “Class is a bubble, formed by privilege, shaping and manipulating your conception of reality.” However, by exposing oneself to others, acknowledging and comprehending this fact can help you properly shift your assumptions and biases. At the same time, Smith urges compassion, because “Suffering is not relative; it is absolute”, and it is not always possible (or fair) to dismiss supposedly privileged peoples’ suffering.

There are a few good examples Smith includes to make her points. One that stood out for me was when the author overheard two mothers critiquing a wealthy mother’s giving their baby an iPad to play with. Smith thinks they are critiquing the impact of giving an infant this kind of technology at so young an age. However:

“Imagine giving something worth nine hundred dollars to a baby.”

“These people got rent money to burn,” confirmed the first lady, and together they laughed ruefully at the profligate fools of 8th Street.

The collection ends with an excellent essay that uses “virus” as an analogy for racism. Smith examines the roots of the virus, the ways in which it manifests, and also how it is nurtured and prolonged; how racism has been woven into the functioning of the country, if not its laws, how even liberals have internalized certain biases that prolong and even cement inequality in the economy, society, education and more.

While the essay looks predominantly at racism in the United States, it also examines one of the United Kingdom’s own “infuriating but comparatively comic rendering of this virus”. Using Boris Johnson’s “ideas man”, Dominic Cummings as an example, the author paints a picture of extreme privilege and disregard for others. Someone for whom “there is one rule for men like him, men with ideas, and another for the ‘people.’ This is an especially British strain of the virus. Class contempt. Technocratic contempt. Philosopher king contempt. When you catch the British strain, you believe the people are there to be ruled…”

Expertly crafted, it’s a passionate, powerful indictment of endemic, systematic racism, it is a superb closer for the collection.

Has America metabolized contempt? Has it lived with the virus so long that it no longer fears it? Is there a strong enough desire for a different America within America?

I took so many notes while reading this — interesting observations, fantastic turns of phrase, and more. I could quote almost the entire book. Instead, I will just strongly recommend it to everyone. Excellent.

Zadie Smith’s Intimations is out now, published by Penguin in Canada, the UK., and in the US.