Let’s start with an introduction: Who is Nicholas Bowling?

Nicholas Bowling is a 35-year-old man who writes books and plays music and sometimes teaches Latin. He is quite tall and his eyesight is very poor. He’s got two children’s novels out with Chicken House, and another one coming from Titan that is categorically not for children.

Titan Books are about to publish your new novel, Alpha Omega. It sounds really interesting: How would you introduce it to a potential reader? Is it part of a series?

It’s a mixture of a few things: part sci-fi, part horror, part satire. Part email chain. It’s about a school in the near future where the kids start getting suddenly, inexplicably, violently ill. In the background is the garish, surreal world of Alpha Omega, an online VR role-playing game that no one – teacher or student – ever wants to leave; the discovery of trepanned skull on the school playing fields, which may or may not be cursed; and a privatized, corporatized academy seeking to micromanage every aspect of the kids’ lives. All told, it’s scary and sad and funny and quite odd. Hopefully it’ll make you think a bit, and laugh a bit. Some people have likened it to Black Mirror, which is a lovely thing, but I think it’s a bit wonkier and weirder than that. It’s not a series – just a one-shot.

I can’t pretend that a lot of the novel isn’t drawn from my own experiences as a teacher. The initial seed came in an assembly at my old school, when it was announced that they would be unearthing the school time capsule. For some reason I couldn’t help imagining that some prankster in the 60s had filled it with botulism or something. What a wheeze! And then I thought about what would happen if you went digging for something on the school grounds and found something you really shouldn’t. Then as I got to writing the story I found all these other anxieties coming out – about the offline and online worlds we’re exposing our kids to, about the utter horror-show of being a teenager at the moment, about the privatization and branding of absolutely everything. There are some quite icky things going on in education at the moment (and lots of very good things, too, I should add).

Inspiration in general? I don’t know. From anything and everything. Usually, truth be told, from reading books or watching films. Lots of ideas come from me loving something and thinking: “I want to do a thing a bit like that.”

As a reader, I grew up on sci-fi and fantasy. Douglas Adams and Terry Pratchett and Tolkien and C.S. Lewis. As a writer, I came back to it via Patrick Rothfuss, which a girlfriend lent me. I spent long years in the wilderness trying to write VERY SERIOUS AND CLEVER books, and only when I rediscovered fantasy and the importance of telling a story did I start writing anything remotely worth reading. But I actually wouldn’t say Alpha Omega is genre fiction – it contains elements of sci-fi and fantasy and horror, but at its heart it’s none of those things. I don’t have a particular genre in mind when I write, but an element of the fantastical always ends up in there, I suppose because sci-fi and fantasy were my daily bread for so long.

Well. Sometimes I think I’m lucky beyond belief. Some days I think about buying a van and driving to Montana and never reading or writing another word for the rest of my life.

One thousand words a day minimum. Writing in the morning. Absolute silence. A fresh papaya on the hour, every hour. A special writing hat made from the scalp of W.H. Auden.

I don’t think there was a specific moment. Is there for anyone? And, if I’m honest, I still don’t know if I do want to be an author. I wanted to be a painter when I was at school, then an actor at university. I’d like to make money from music, too. There have been times when I’ve wanted to retrain as a zoologist. Or a butcher, or something. That kind of wearying existential chatter never really goes away, and I suspect most people have it, writers or otherwise. I suppose I’ve always been into writing stories and drawing pictures. My English degree derailed that because it was so insistent on literary criticism and so lacking in opportunities to be creative. The result of that was that my first forays into “real” writing were about 50 abortive attempts to bag the Booker Prize, none more than a paragraph long and all very earnest and pretentious and awful awful awful. Then I read The Name of The Wind when I was about 25 and I got back into fantasy and sci-fi and remembered books are meant to be fun, which was an important epiphany.

I read very eclectically and very slowly, so in all honesty I don’t really know what the state of sci-fi is at the moment. From the outside it seems exciting and amazingly varied – a place for questioning and subverting old tropes. I suppose it always has been that, but the boundaries of the genre itself seem more fluid than ever now, I think. That’s how I’ve slipped in there, without really writing a sci-fi book.

I’ve just finished another fantasy book for children for Chicken House, and I’m part way through my second book for Titan. It’s about a woman searching for her twin brother in a cultish spiritual retreat in California and it’s the same brand of sad-funny-scary as Alpha Omega.

Carter Beats the Devil by Glen David Gold and The Music Instinct by Philip Ball. 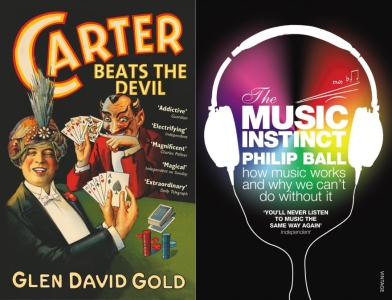 Station Eleven is the one that I foist on people most. Also – honestly – Oh, The Places You’ll Go! by Doctor Seuss. It’s one of the wisest and most reassuring books out there. 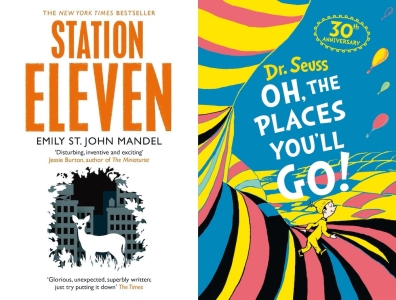 My coccyx is magnetic.

I tend not to think that far ahead, but I’m making a Bolognese next week, so that’ll be pretty cool.

Nicholas Bowling’s Alpha Omega is published tomorrow by Titan Books in North America and in the UK.