Let’s start with an introduction: Who is Vicki Jarrett?

Do other people have coherent answers when asked who they are? I’m not one of those people. As a massive over-thinker, questions like that can create sink holes in my brain that’ll take me weeks to crawl out of so, sorry, but I’ll pass on that one.

Your new novel, Always North, was recently published by Unsung Stories. It looks really interesting: How would you introduce it to a potential reader?

Always North is about complicity, accountability and our messed-up environment, about what constitutes mind and memory, and how wrong we might be about the way time works. It’s set over two time frames and settings: an oil survey vessel in the Arctic Ocean in 2025 and the Scottish Highlands in 2045. It’s been called ‘psychological scifi’ and ‘speculative literary fiction’ but I’m happy for readers to decide what they think it is.

Some years ago I worked as a technical author for a company that made navigation software for the offshore seismic exploration industry and was involved, peripherally, in writing the documentation for an ice-breaker survey. One of the offshore engineers sent a short video back to the office of a polar bear close to their vessel. It was only a few seconds of footage but that bear had such presence, it gave me goose-bumps and I couldn’t shake the feeling there was a story there. I draw inspiration from daily life and have used previous jobs as starting points for fiction quite often. It’s only ever the seed of an idea though, a jumping off point. I don’t write autobiography or memoir. In the case of Always North, I jumped a long way off from that original inspiration.

Firstly as a kid through the comic 2000AD, which my brother and I would get into proper fist fights over who got to read it first. Earned me a few bruises but it was worth it, every time. In terms of genre books, early loves were Douglas Adams, Tolkien, Ray Bradbury, Kurt Vonnegut. I’ve always read really widely though and never paid much attention to whether a book was considered ‘genre’ or ‘literary’ or whatever. The books I love the most now tend to be those that are hard to classify, that don’t behave themselves and stay in their boxes, the unruly creatures.

I prefer writing to ‘being a writer’. When I first started writing, there wasn’t so much of an expectation for authors to be out there promoting their work but things have changed a lot since then. I’d quite happily stick to the writing part and hand everything else over to people more qualified and able in those areas than I. The process of going public can be quite disconcerting. Writers, for the most part, are people who like to sit alone with their thoughts, so coming out of that cocoon to do public events always involves a certain degree of emotional whiplash for me. That said, I’ve met some fascinating and genuinely lovely people in the process so there are upsides.

Every piece of writing brings it’s own particular demands. Also, I have a family and need to work so the amount of time I can devote to writing varies enormously and isn’t always under my control. At times I’ve written late into the night, other times early in the morning and often snatched pieces of time wherever I can find them. I’d love to have a regular daily routine but my life doesn’t seem to work in a way that would make that possible. I often think it’d be really useful to know how I’m going to approach a new piece of writing, to draw up really detailed plans and so on but I’ve never done that. I tend to just start following whatever spark of an idea/character/line of dialogue/image has caught my interest and see where it leads me. I will write plans and do proper research once it’s up and running but it has to have some substance and be showing signs of life first. Then I go off at all sorts of tangents, get lost in research holes, and write myself into and out of dead ends. At some point I’ll give myself a talking to and finish the damn thing. I’m not sure any of that qualifies as a specific practice but that’s how it goes for me.

I’ve been writing down odd thoughts and ideas since my early teens, not with any particular idea of being an author, just a strange compulsion to try to make sense of things on paper. The first story I actually finished, I was in my mid-twenties by this time, was called ‘Mona Lisa and Chips’ which drew on my experience of working in a chip shop. I sent it into the Macallan Scotland on Sunday short story competition which was then the biggest short story competition in Europe. The story came second, which was a surprise to say the least. The winner that year was the then-unknown Michel Faber. He’d been writing for ages and already had novels ready to go. I had nothing. Definitely the right person won that day!

I do look back on it and laugh mostly because when the judges phoned me to tell me I’d been shortlisted I kept hanging up on them as I was convinced it was a friend of mine kidding around. I hung up on them several times but thankfully they kept calling back.

What’s interesting to me are the things you find in the gaps between genres and between genre and literary work, the hybrids. I’d like to see lots more blurring of the boundaries and I think that’s happening more and more in some really interesting ways. I couldn’t tell you where my work might fit it since I don’t have a clear idea yet where I’m going with it. I think I mentioned I’m not big on plans!

I’ve got some ideas knocking around my head I’m itching to explore but very little time to do so right now. The pipeline’s more of a holding tank until I can change that.

I’m reading Gnomon by Nick Harkaway. It’s the first of his I’ve read. I was drawn in by the promise of intertwining stories and big ideas and it certainly delivers on that score. Next on my radar is An Invite to Eternity: Tales of Nature Disrupted from Calque Press. I read a lot of short stories and would like to see the form achieve a much higher profile than it currently has in the UK. This is a collection of ecologically themed shorts from international authors. 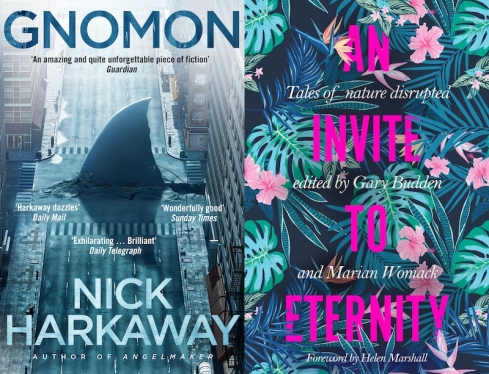 It would depend entirely on the particular someone. What may be an undiluted joy for one could be dross to another. Nothing works for everyone. I’d have to get to know this someone, or at least talk to them for a while.

I make the best plum crumble in the known universe.

In terms of bookish happenings, I’m looking forward to Cymera2020 in Edinburgh in June. The Cymera Festival started in 2019 as a Scotland’s first dedicated book festival of Science Fiction, Fantasy and Horror writing, as a response to the poor representation of genre works at mainstream book festivals. It was a huge success, lots of great speakers and events and a really friendly, inclusive atmosphere. I’d recommend a visit. I’ll be taking part this year so come and say hello if you can make it!