Friends for decades, three men reunite for a summer and a mystery from their past resurfaces…

One beautiful September day, three men convene on Martha’s Vineyard, friends ever since meeting in college circa the sixties. They couldn’t have been more different then, or even today — Lincoln’s a commercial real estate broker, Teddy a tiny-press publisher, and Mickey a musician beyond his rockin’ age. But each man holds his own secrets, in addition to the monumental mystery that none of them has ever stopped puzzling over since a Memorial Day weekend right here on the Vineyard in 1971: the disappearance of the woman each of them loved — Jacy Calloway. Now, more than forty years later, as this new weekend unfolds, three lives are displayed in their entirety while the distant past confounds the present like a relentless squall of surprise and discovery. Shot through with Russo’s trademark comedy and humanity, Chances Are… also introduces a new level of suspense and menace that will quicken the reader’s heartbeat throughout this absorbing saga of how friendship’s bonds are every bit as constricting and rewarding as those of family or any other community.

Chances Are… is the latest novel by one of my favourite authors. This time, the Pulitzer Prize-winning author of Empire Falls (among many other great novels and short stories) adds an element of mystery into his fiction. It’s very well done, but his sharp observation and characterization remains at the core of this novel. I really enjoyed this.

It’s often difficult to think of what can be said about Richard Russo’s novels that hasn’t been said before — by others and also here on CR. His novels are all sharply observed, populated by fully-formed characters. His novels have a gentle humour scattered within. His characterization is even-handed, portraying (often with affection) the foibles and weaknesses of the men he chronicles. (For the main, his protagonists are male.) 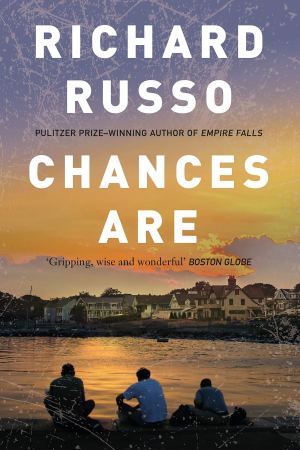 Each of his characters comes from a different background, and has forged their own paths into adulthood. Thrown together at college, the three friends bonded over their shared activities and also their shared love and affection for Jacy. As friends, they have an unspoken promise not to pursue a relationship with their friend. However, as is often the case, situation allows their feelings to come out, with mixed results.

Alternating between the 1970s and the present day, Russo paints a picture of these characters’ lives: their idyllic time at college, the tense expectation of the Vietnam draft, which professional paths they took, their families, health, and more. He also unfolds for us the story of Jacy, her disappearance, and fate. The friends’ interest in her disappearance is reignited on this summer trip. It is a hook upon which the novel is hung, but as mentioned earlier the story is just as much about these three men and how they have weathered the years since their friend disappeared.

Russo does give us a full account of Jacy’s story and fate. It was not what I was expecting, and was incredibly affecting. The author gives us drips of information, clues, and red herrings as the novel progresses, building to a satisfying reveal towards the end.

Overall, then, Chances Are… is another excellent novel. It has all of the hallmarks of what has made Russo such a beloved and successful author, but the new mystery elements give it that something extra that I think might help him grow his audience even more.

Definitely recommended. I really enjoyed this.

Chances Are… is out now, published by Knopf (North America) and Allen & Unwin (UK).