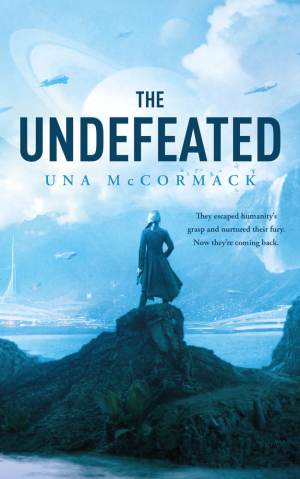 She was a warrior of words.

As a journalist she exposed corruption across the Interstellar Commonwealth, shifting public opinion and destroying careers in the process.

Long-since retired, she travels back to the planet of her childhood, partly through a sense of nostalgia, partly to avoid running from humanity’s newest — and self-created — enemy, the jenjer.

Because the enemy is coming, and nothing can stand in its way.

I’ve been looking forward to this novella ever since I read the synopsis. I’m very happy to report that it totally lived up to my high expectations. A journalist returns home as the universe holds its breath, waiting for a potential threat to reveal itself.

In The Undefeated, McCormack offers a story about an interstellar society beginning to see the long-tail of certain injustices that have been perpetuated for decades (maybe centuries — the scope of time is not clear). Our protagonist, Monica, is a journalist who has travelled back to her home planet, apparently to bear witness to the coming inevitable societal change. The universe is in a tense moment, rumours of change and a new enemy that could threaten and upend the status quo.

McCormack’s writing is excellent, and I quickly fell into the story. The author’s prose is clear and very well composed — there wasn’t a single clunky sentence or garbled description. Monica’s nostalgia from returning home is very well done, and her memories of her childhood are interesting. There is a balance between what Monica believed when she was a child, and the painful embarrassment as she remembers these beliefs and how different they are now. I also liked that Monica is an unreliable narrator who is at the same time desperately trying to be reliable — a result of her professional standards. Through the alternating timelines, we learn more about Monica’s upbringing, her unsuccessful marriage to a “famous writer”, and also her difficult and troubled relationship with her mother.

The “enemy”, the “undefeated” of the story are the jenjer — genetically enhanced humans who now have longevity, enhanced wakefulness, increased strength and stamina, and so forth. However, they are also dependent on certain medications in order to maintain their changed metabolism and nature. McCormack never goes too deep into the background or history of how the jenjer were created. However, given the obvious parallels between their place in society and that of slaves in the past, readers won’t have any problems situating them in the story and also this reality. The novella looks at what happens when the slaves upon whose labour society functions decide that they don’t need the slave masters any more. There is so much in the novella that I really liked — especially the way the author approaches the issues is excellent, intelligent and clear.

In this society, there are certain things that are “not done” or déclassé when it comes to interactions between humans and the jenjer — certain questions that aren’t asked, assumptions that people rarely (if ever) question out loud. Even though everyone knows what’s going on. They’re an interesting creation, and I’d certainly be interested in reading more stories set in this universe.

I very much enjoyed the relatively sparse-yet-clear world-building. The protagonist is an interesting guide to this future, too: she’s aware of how the beliefs of her youth were pretty reprehensible, a product of privilege and ignorance. Monica is also aware of how she has benefited from her position, and even though she is aware of the injustices around her, she has not exactly separated or divested herself of the trappings of privilege. She is a very honest protagonist, as a result — while she has dedicated much of her professional life to shining a light on the worst injustices of the universe, she retains certain blindspots that McCormack highlights very well (in one case brilliantly, towards the end).

Definitely recommended for all fans of intelligent, well-written sci-fi. I really enjoyed this, and will definitely be reading more by the author as soon as I can.

Una McCormack’s The Undefeated is due to be published by Tor.com on May 14th, in North America and in the UK.