Skip to content
HomeQuick Review: THE CORROSION OF CONSERVATISM by Max Boot (Liveright) 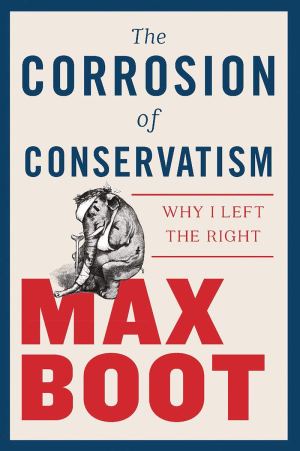 As nativism, xenophobia, vile racism, and assaults on the rule of law threaten the very fabric of our nation, The Corrosion of Conservatism presents an urgent defense of American democracy.

Pronouncing Mexican immigrants to be “rapists,” Donald Trump announced his 2015 presidential bid, causing Max Boot to think he was watching a dystopian science-fiction movie. The respected conservative historian couldn’t fathom that the party of Lincoln, Roosevelt, and Reagan could endorse such an unqualified reality-TV star. Yet the Twilight Zone episode that Boot believed he was watching created an ideological dislocation so shattering that Boot’s transformation from Republican foreign policy adviser to celebrated anti-Trump columnist becomes the dramatic story of The Corrosion of Conservatism.

No longer a Republican, but also not a Democrat, Boot here records his ideological journey from a “movement” conservative to a man without a party, beginning with his political coming-of-age as a young émigré from the Soviet Union, enthralled with the National Review and the conservative intellectual tradition of Russell Kirk and F. A. Hayek. Against this personal odyssey, Boot simultaneously traces the evolution of modern American conservatism, jump-started by Barry Goldwater’s canonical The Conscience of a Conservative, to the rise of Trumpism and its gradual corrosion of what was once the Republican Party.

While 90 percent of his fellow Republicans became political “toadies” in the aftermath of the 2016 election, Boot stood his ground, enduring the vitriol of his erstwhile conservative colleagues, trolled on Twitter by a white supremacist who depicted his “execution” in a gas chamber by a smiling, Nazi-clad Trump. And yet, Boot nevertheless remains a villain to some partisan circles for his enduring commitment to conservative fiscal and national security principles. It is from this isolated position, then, that Boot launches this bold declaration of dissent and its urgent plea for true, bipartisan cooperation.

With uncompromising insights, The Corrosion of Conservatism evokes both a president who has traduced every norm and the rise of a nascent centrist movement to counter Trump’s assault on democracy.

I’ve been aware of Max Boot’s writings for a long time. I read many of his articles as part of my research for one of my PhD chapters. I frequently disagreed with him, especially on US domestic policy, but was always interested in reading what he thought about foreign policy (the subject of my thesis). During 2016, like many who are interested in/obsessed with US politics, I noticed his sharp break from his party and have watched with interest his evolution as his former-party has imploded and wholly bought into Trumpism.

For the main, this book won’t be a surprise to… well, anyone really. Boot has gone through much the same intellectual/political evolution or metamorphosis of many #NeverTrump Republicans. He is shocked and appalled (as are most of us) by the Republican Party’s wholesale acceptance of the Trump style and agenda, and in particular their slavish fawning over their new cult leader. His chapters are well-researched and sourced, and as a lefty it was next to impossible to disagree with his interpretation of the new GOP. There’s a lot of thought-provoking content, as well as plenty of passages that will have long-time centrists and lefties (as well as new converts to the centre and left) cheering or nodding their heads in righteous agreement. It would be quite easy — if time-consuming — to work methodically through the book, agreeing with and unpacking Boot’s break with his party. (Just get the book and read it. It’ll be quicker and far more satisfying than reading any survey I might produce.)

Boot’s conclusions at the end are also very interesting: thought-provoking and with considerable merit. His suggestions for a new centrist/centre-right party could easily find support and approval from many centrists and even a fair few centre-lefties. They are common-sense suggestions, utterly lacking in the frothing zealotry that is now indicative of the Republican Party. It was also nice to learn of the new centrist organization he has helped establish — Renew Democracy Initiative — which I’ll be following with interest in the future.

I found Boot’s personal political/intellectual history interesting, and he was brutally honest about his early provocations (thankfully, never as bad as felon-but-for-a-timely-pardon Dinesh D’Souza or Laura Ingraham). He walks us through key events of American conservative history, how he came to the movement. He details the collapse of his movement and party, offering short portraits of some of the worst offenders. He is especially good when contrasting the pre- and post-2016 versions of so-called conservatives he once respected and even worked for. His style is calm, accessible, eloquent, and remains pretty respectful, all things considered.

However, there was a point — Chapter 7, “The Origins of Trumpism”, to be exact — at which I almost quit reading the book. What follows is a bit of a rant, for which I apologize, but it’s something very close to my heart. In this chapter, Boot effectively admits to committing research malpractice. In the first couple of pages of the chapter he writes that he finally started reading outside of the conservative publishing fold, and he discovered that,

“there is no doubt that there has always been a dark underside to conservatism, and one that I chose for most of my life to ignore. It’s amazing how little you can see when your eyes are closed!”

That lighthearted dismissal at the end there is incredibly irritating. His discovery of how racist so much of the Republican Party’s actions and elections have been is abysmally late for someone whose life has been writing about and paying attention to America politics and foreign policy. Sure, it’s nice that he’s finally joined the rest of us whose eyes have been open for decades, but how can anyone be employed as a political commentator not read the opposing side? True, I’ve seen plenty of this at lefty organizations and publications that I have either worked or volunteered for. But Boot works for the Council on Foreign Relations: an apparent bastion of rigorous foreign policy debate and research! He was also an editor of the Wall Street Journal‘s Opinions page from a very young age. How can anyone get this far (he now in his 50s) without ever exploring the writing outside of his own “camp”? I was deeply disappointed by this admission. I read the book while grading undergraduate history papers, and even some of them managed to read both sides of an argument!

Not long after the statement above, he then moved on to taking a deeper look at the standard-bearers and founders of his movement.

“Goldwater was willing to risk nuclear war to free a single ‘captive nation’ from Communist control. I used to think that Goldwater’s reputation as an extremist was a liberal libel. Reading his actual words — something I had not done before — reveals that he really was an extremist.”

I was shocked (again) that Boot admitted to not even reading what the functional founder of his movement actually said or espoused. How can anyone employed as a movement intellectual be taken seriously if they have never read the words of your intellectual ancestor? This isn’t the same as not reading one or two classic texts: Goldwater was the man. He is America’s modern ur-conservative, almost. His campaign kicked off the modern (or, pre-Trump, anyway) popular conservative movement. There are other core writers Boot has read, of course, and he brings some of them up in his ongoing critique of the various conservatives who were not, actually, as virtuous as their reputations suggest (Schlafly, Buckley, Carlson, etc.).

Boot is also very good when critiquing Fox News’ continued dive-bomb into the gutter, but also the impact that it and other conservative media outlets can have, as well as his own wholehearted acceptance of the movement’s narrative:

“I was not just drinking the Kool-Aid; I was bathing in it. I understand what Fox News viewers experience because I experienced a version of the same brainwashing myself. This was a process of indoctrination — largely self-indoctrination, I should add — that took decades and that I am only now escaping.”

I also completely agree on his interpretation of the what amounts to “intelligent” rhetoric and debate for current Republican “intellectuals”: “in a nutshell… the credo of today’s high-profile conservatives: say anything to ‘trigger’ the ‘libtards’ and ‘snowflakes.'” He’s correct that the conservative movement has historically been populated by incredibly eloquent authors and journalists (Buckley, again, for example). However, I’ve long suspected that these writers’ eloquence and erudition are the main reasons they are considered so “respectable”. If you actually read and listen to what they have written and said you will, as Boot has now, realize that they were not as respectable as they would like us to believe. “Speak eloquently and hide the racism,” if you will.

Much of my time reading this book — which is, it should be stressed, very well written — was spent wondering why it took Boot so long to see what was happening in front of him. This has become typical when reading articles and books by other former-Republicans whose worlds have been shaken by the victory of Donald Trump (for example, Rick Wilson’s Everything Trump Touches Dies). “Where exactly have you been all this time?” Even when I was much younger, and not as versed in US politics and history as I am now, it was clear that the Republican Party has been, as an institution, corrupt, hypocritical and often flagrantly racist for decades. Boot does address this, at some length and honestly, but… the frustration lingered.

I first became aware of US politics in the 1990s (I was born in the early 1980s, but acquired a pretty early interest in politics and international affairs), and the Republicans were shameless and shameful throughout the Clinton administration and afterwards just became worse. Boot touches upon some of these periods, and does offer some good observations (not many, though…). For me, everything can be traced back to Newt Gingrich’s rise to power. The day after Trump won in 2016, I started pulling together notes for either a long article or short book about how Trump’s rise could be traced back to Gingrich’s crusade against Democrats (he told his fellow Republicans to treat US politics as if it were a civil war). Unfortunately, others have beaten me to the punch (for example, this feature by McKay Coppins for The Atlantic), but I might still jot some things down.

Early in 2016 I remember having a number of conversations in which I said that Trump finding support for a run for the presidency as a Republican was inevitable (I did not expect him to win the nomination, nor the election) — I just thought we had a few more years before the GOP would drop all the pretence and present their true face to the world.

If you’re looking for a thought-provoking, intelligent book by a conservative who has wrestled with the rise of Donald Trump, then I would certainly recommend Corrosion of Conservatism. (Just… try not to get as annoyed as I did by his Chapter 7 admissions.)

Max Boot’s The Corrosion of Conservatism is out now, published by W.W. Norton.