Let’s start with an introduction: Who is K.R. Richardson?

Your new novel, Blood Orbit, will be published by Pyr in May. It looks really interesting: How would you introduce it to a potential reader? Is it part of a series?

Gritty cop/crime noir, wearing science fiction clothes in the tradition of Blade Runner and Altered Carbon. It’s the first in the Gattis File series — the publisher and I are discussing Gattis File Book 2 right now. 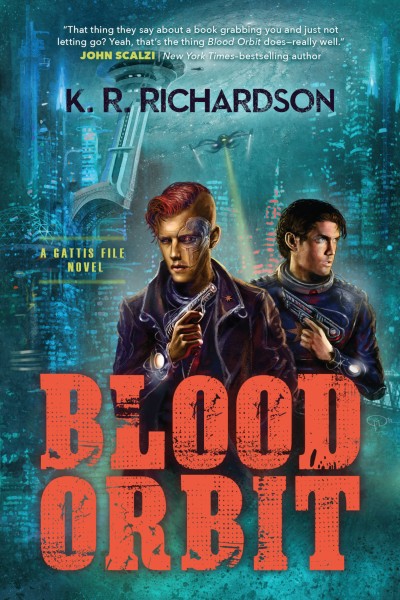 I ran across a real-life crime while doing research for a fantasy novel, which was published under another pseudonym, that I found intriguing. It struck me that the crime nearly went unsolved due to assumptions made by the investigators that reflected the social conditions, prejudices, and political issues of the time. Had the criminals done only one thing differently, they might have gotten away with it. The idea of that “one thing” in the right social circumstance to create a “perfect” crime kept pecking at my imagination. So, I set out to create a setting where all of that came together. Then I just needed to figure out the right detective to solve the crime in spite of all that. Naturally, things got a little more complicated, and the ramifications of the social conditions I’d created gave me a chance to explore a lot of other ideas about crime and its specific relation to the social structures and assumptions it springs from.

Generally, I look to history and real crimes, accidents, disasters, etc for inspiration, as well as my own interests in science, literature, and things bizarre, and consider how those events would be affected by different contexts or one small change. I’ve always looked on history as a trove of stories. Not that I’m above plundering Shakespeare or some other public domain work — it’s not plagiarism if you’re stealing ideas that are already free of legal constraints — and then slapping it around a bit with some weird elements of imagination.

I’ve always read whatever sounded interesting. Dad was an English teacher and he had no prejudices about one form of literature being “better” than another — if it sparked someone’s imagination or their drive to read, learn, or do some creating of their own, he was in favour. He read to us kids from the time we were willing to sit still long enough and it didn’t matter to him what it was that interested us: Homer was as good as C.S. Lewis, A Wrinkle in Time was as wonderful as The Wind in the Willows, even a bit of Paul Gallico, and P. G. Wodehouse along with our Winnie the Pooh. Fantasy was always on the table and Science Fiction just naturally came along. I found Isaac Asimov and Arthur C. Clarke a little tough initially, but this was the age of Star Trek and Star Wars, Andre Norton, Phillip K. Dick, and Neal Stephenson, too.

I got interested in puzzles and mysteries at a young age with Encyclopedia Brown, The Great Brain, and whatever else I could lay hands on that was considered age-appropriate. When I was thirteen, my parents started lending me mystery books from their own shelves: Conan Doyle, Christie, Sayers, Ellery Queen, Ngaio Marsh, Donald Westlake, Josephine Tey, and John Creasey to start, then Joseph Wambaugh, Ross Macdonald, Margaret Millar, John D. MacDonald, Len Deighton… I caught the hardboiled bug on my own and started reading Hammett, Chandler, Caine, and so on at about sixteen and I still read a lot of that style in both the original and modern schools. I continue to read whatever takes my fancy, regardless of label or author. I also read a lot of non-fiction.

Writing is great. Even at its worst, I do love being a writer. Being an author is sometimes less fun. Dorothy Parker is usually cited as having said, “I hate writing; I love having written.” While I can sympathize with the torment of the writing process, I find the uncertainty and lack of transparency in the current iteration of large, commercial publishing much more frustrating. As raw producers of fiction, authors are generally discouraged from discussing contract clauses, money, promotional budgets, publication schedules, and a great deal of  “the business” which would be beneficial information to a great many other writers, and ourselves. That doesn’t really help writers, it only helps the corporations that own publishing houses. At the moment, the state of self-publishing, small press, boutique, and micro-press publishing have improved from the shady, ill-paid, poorly-regarded end of the pool that they were even as late as 2010, into a thriving, viable market for writers, though forethought, caution, and good research are still required to navigate those waters successfully.  But, big or small, it’s all still fraught with shoals of shit that can rip the heart right out of you if you let it. Luckily, we are gifted — and cursed — with the most comprehensive and quick information exchange systems in history, which is terribly helpful if used for Good instead of Evil.

I constantly put bits aside as I find them in the course of some other research and then lose them, find them again, and get excited to see what I can do with them. I usually start with a fairly rough idea from the prompting of a “found” bit, or an article read online, or in the newspaper, or heard on the radio, or a book or short I’ve read. I write a bit as it comes to me and when I get stumped, I stop, pull back, and look it over to see what’s caused the blockage. That always leads to research and outlining — which happen at the same time, to begin with — then supporting research and reading. Then I update my outline and go back to writing.

When I’m into the writing stage under deadline, I set a word count goal for the week and I usually write Monday through Friday. I sometimes listen to music, but not if it has lyrics I can understand — I find myself typing the lyrics. I never have video of any kind on while I’m writing as I find it too seductively lazy-making. In the past, I’ve set the weekly goal on novels at 10,000-12,000 words per week, short stories and novellas I find much more difficult, so they usually have a 5,000-7,000 word weekly goal, but it can take a couple of weeks for me to be satisfied with a short story. Novels usually take three to four months after the initial research and outline.

I get up and walk around with my dogs about once an hour or so during daylight hours, as I live in the countryside and I hate walking on dirt roads in the dark. Also, the bears, deer, owls, and coyotes don’t like the competition.

I wrote a considerable number of roughly-polished pieces of shit which were roundly — and rightly — rejected in high school and during my inter-scholastic period before I finally dragged my lazy ass to college. My first published piece was a non-fiction article for the university magazine about the business of death and mourning. It had been prompted by the death of my father earlier in the year and it threw a small bit of light into a grim situation. Later, I became the Editor of that magazine, followed by various editorial jobs at others, and got distracted from fiction by the business of non-fiction editing for quite a few years. I wrote fiction on the side as a hobby, but submitted no more until I wrote my first urban fantasy novel manuscript, which eventually got published and started my fiction career under a long-running pseudonym. I have a great affection for the communities of creative lunatics I hung out with at the time: they encouraged the work for the most part, and occasionally scoffed at me for it. Little gets me motivated like being told I can’t do something, so I got to it, without really thinking “I shall become an author.” I thought about writing things other people would enjoy and the role of “author” simply happened.

“Genre” is a shelving tag. I will always write in the cross-overs and the cracks, because I find containing myself to one niche impossible. I think the idea of genres and well-defined areas of fiction is useful only for marketing purposes and that the current motion in fiction publishing is, of necessity, toward multiple tagging, rather than narrow pigeonholing. It’s more difficult for a traditional marketing team to sell under such a paradigm, but I think we do ourselves a disservice by thinking of a book’s “market” as only the Venn-diagram intersection of overlapping readerships. We should be looking at selling in all the paths that lead to that intersection, rather than restricting ourselves to the intersection alone. I am, at heart, a mystery/crime writer, so it’s in my interest to sell to that market as well as the market that is interested in the Science Fiction or Fantasy elements of the work. Double the audience!

I’m currently working on Gattis File #2, as well as a couple of fantasy novel ideas that have been on the back burners for a while, and a caper film screenplay.

No Middle Name by Lee Child, A Conflict of Visions: Ideological Origins of Political Struggles by Thomas Sowell, and Seasons in Hell: Understanding Bosnia’s War by Ed Vulliamy.

I was abducted as a child and recovered by a private investigator. That may have contributed to my interest in detective fiction…

Selling the house. Because it will allow me to build a new one that looks at the ocean and still has room for all the dogs.

K.R. Richardson’s Blood Orbit is published next week by Pyr Books in North America and in the UK.