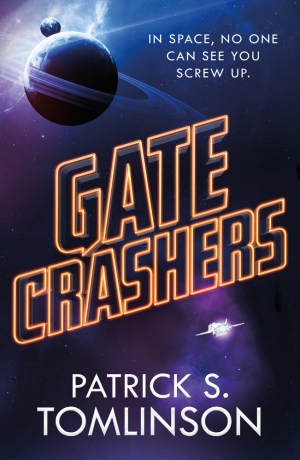 There is a growing number of authors writing more humorous and lighter science fiction and fantasy, suggesting we are going through one of the cyclical tonal shifts within the genres (I think it’s fair to say that many were feeling wearied by the grimdark influence on the SFF genres). Patrick S. Tomlinson‘s next novel, Gate Crashers sounds like it will be a lot of fun. Published on June 26th by Tor Books, here’s the synopsis:

The only thing as infinite and expansive as the universe is humanity’s unquestionable ability to make bad decisions.

Humankind ventures further into the galaxy than ever before… and immediately causes an intergalactic incident. In their infinite wisdom, the crew of the exploration vessel Magellan, or as she prefers “Maggie,” decides to bring the alienstructure they just found back to Earth. The only problem? The aliens are awfully fond of that structure.

A planet full of bumbling, highly evolved primates has just put itself on a collision course with a far wider, and more hostile, galaxy that is stranger than anyone can possibly imagine.

Tomlinson’s previous novels include the Children of a Dead Earth trilogy, published by Angry Robot Books. Gate Crashers will be published by Tor Books in North America and in the UK.