Let’s start with an introduction: Who is Simon R. Green?

Simon R. Green is the New York Times best-selling author of over sixty novels, two collections of short stories, and wrote the screenplay for the film Judas Ghost. He rides motorcycles, acts in open air Shakespeare productions, and has worked as a Chippendale. (Not all of those may be entirely true.)

Your latest novel, Night Fall, will be published by Ace in June. It’s the final novel in your Secret Histories series. How would you introduce the series to a potential reader? What can fans of the series expect from the finale?

Night Fall ties together my two main series. The Nightside books, which feature a private eye operating in the Twilight Zone solving cases of the weird and uncanny; and the Secret Histories books, featuring the very secret agent, Shaman Bond. The Nightside is a film noir world, full of shadey characters. The Secret Histories was all about punishing the bad guys. So when these two worlds go to war… The body count is going to be amazing. But this book also features characters from my other series, like the Ghost Finders, Hawk & Fisher, Drinking Midnight Wine, and Shadows Fall. So essentially, this books stars everybody, and guest stars everybody else.

This novel is something I’ve been building up to for over twenty-five years, answering all the questions and all the mysteries, including some things no-one is going to see coming. But you don’t need to have read all the previous books; just dive right in and enjoy yourself. Where do I draw my inspiration? A blank piece of paper and a pencil. If I sit there long enough, something will come.

I was eight years old when I discovered Dr Who on television, and I was never the same again. Also, my father was a big fan of Edgar Rice Boroughs, and once I was introduced to his Tarzan and Mars books I couldn’t get enough of them.

I used to work for a living, and I never really took to it. Being a full time writer means I work just as hard, but I’m my own boss.

I write six hours a day, seven days a week. I read everything I can get my hands on. I love films. Put all that together; and you get books.

I can’t remember a time when I didn’t want to be a writer. I started taking it seriously when I was a student, and my early stuff was so bad that I want it all cremated with me when I go, so no-one will ever see it.

The genre today is HUGE. Back when I started out, I read everything, because there was so little of it you could read everything. Now there’s so much of it, the field can cover a lot more ground. I still love going into Forbidden Planet, and just walking up and down the shelves, looking for what’s new, what’s exciting, searching out the Good Stuff. As to where I fit in… Other people may do better plots or better characters, but no-one does weird shit like I do.

I’m about to start work on the seventh book in my Ishmael Jones series, (Agatha Christie style murder mysteries with SF and fantasy elements), and I’ve got more books lined up waiting to be written. 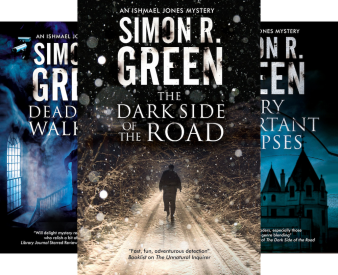 I’ve just finished Meddling Kids by Edgar Cantero, which is a lot of fun, and The Infernal Battalion by Django Wexler, the latest in his magnificent Shadow Campaigns series. I’m also re-reading M R James’s ghost stories. No-one did it better than him.

The Face In The Frost by John Bellairs. Or, of course, anything by me.

I have a Humanities BA (English Literature and Philosophy, Joint Honours) and an MA (Modern English and American Literature), neither of which were particularly useful in the job market. Also, I once punched a swan.