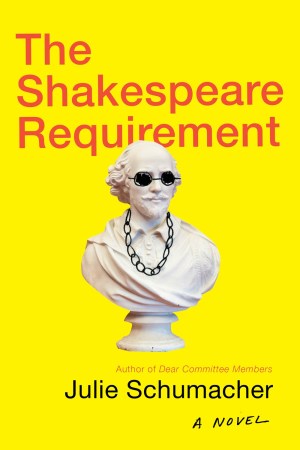 The slings and arrows of outrageous fortune keep hitting beleaguered English professor Jason Fitger right between the eyes in this hilarious and eagerly awaited sequel to the cult classic of anhedonic academe, the Thurber Prize-winning Dear Committee Members. Once more into the breach…

Now is the fall of his discontent, as Jason Fitger, newly appointed chair of the English Department of Payne University, takes arms against a sea of troubles, personal and institutional. His ex-wife is sleeping with the dean who must approve whatever modest initiatives he undertakes. The fearsome department secretary Fran clearly runs the show (when not taking in rescue parrots and dogs) and holds plenty of secrets she’s not sharing. The lavishly funded Econ Department keeps siphoning off English’s meager resources and has taken aim at its remaining office space. And Fitger’s attempt to get a mossbacked and antediluvian Shakespeare scholar to retire backfires spectacularly when the press concludes that the Bard is being kicked to the curricular curb.

Lord, what fools these mortals be! Julie Schumacher proves the point and makes the most of it in this delicious romp of satire.

Julie Schumacher’s previous novel, Dear Committee Members was one of my favourite novels of 2014: it was funny, warm-hearted, extremely well-written, and populated by familiar and endearing (albeit hapless) characters. In The Shakespeare Requirement, the author reunites readers with characters at Payne University. Written in a slightly different style, it is no less engaging, amusing and sharply observed. Another excellent novel.

Where Dear Committee Members is written in an epistolary style, The Shakespeare Requirement takes a more traditional approach, but is no less amusing and sharply observant for this. A few of the same characters appear, each of which is pursuing their own agendas — be it total university domination (dean of the business school), a sense of identity and belonging (a first year student), a job (a PhD candidate), or just making it through the year intact (Fitger).

For those who have experience with postgraduate studies, or have taught in universities, there will be frequent moments of (painful) recognition and sympathy with the characters. Schumacher does a wonderful job of highlighting all of the eccentricities one can find at universities, and among faculty members — not to mention the combative relationship between administration and faculty that can develop. For example, when the powers that be decree that every department has to develop a “statement of vision” to justify their existence in the modern academic landscape.

Through the eyes of Fitger and his fellow faculty members, we get a glimpse (accurate, in my experience) of how professors generally can see students, especially undergraduates. Equally, Schumacher spends a fair amount of time examining and poking fun at inter- and intra-departmental politics and bitchiness. How animosity can be based on not caring for a colleague’s “ambition or… pedagogical philosophy”. The Shakespeare professor, Cassovan, is particularly withering in his opinions of his peers.

Given the poorly socialized nature of his own department, whose faculty behaved with all the decorum of a pack of wolves, Cassovan’s general workplace practice was to keep his own counsel, speak cordially and briefly when addressed, and get his work done.

Schumacher has a gift for description and setting the scene. For example:

All right, then: forward. After apologizing for missing their opening session, Fitger glanced at the roster, which he had meant to study in advance in order to pronounce his students’ names correctly (too late for that), and confronted the two dozen young strangers armed with pristine notebooks and pencils, who for most of their short lives had been hectored about the importance of education. Having purchased a $39,000 ticket, they found themselves seated in a radioactive bunker, their instructor a one-eyed Cthulhu restlessly scratching himself and pacing back and forth on an isthmus of faded carpet at the front of the room.

There were a few times when I thought Schumacher reached for some low-hanging fruit. For example, the “useless” nature of English degrees and, especially, PhDs. I do not hold with this perspective, but one cannot deny that modern culture often sneers at English and Arts degrees.

He had infiltrated the celebration via the usual method: by wearing a black long-sleeved shirt ($1.29 at Goodwill) with the name FRANK above the breast pocket. One of a collection of similar shirts, it gave him a feeling of confidence he otherwise lacked, while simultaneously allowing him to pass for a waiter — a job which would have afforded him a salary and job security several times that of an English PhD.

And, later, that the same character’s “fraying cuffs… signify[ied] loneliness, debt, and a PhD that had led to a rotisserie of underpaid jobs”. All true in many instances, I’m sure, but it felt a little too easy for someone who otherwise offers new and interesting takes on the struggles in academia and of academics (wannabes and got-to-bes).

Alongside the amusing satire, Schumacher incorporates some excellent commentary on the changing nature of academia and academic life (“Out with considered argument and nuance; in with publicity stunts, competitive righteousness, and the thrill of rage”), and also advice on how one should approach learning and one’s own ambitions and goals. At one point, a female student is told, “don’t waste your time being impressed by people (usually men) who are already adequately impressed by themselves.” (This put me in mind of what I’d heard of Meg Wolitzer’s The Wife, which I recently bought and will be reading very soon.)

Overall, I thoroughly enjoyed reading The Shakespeare Requirement. If you enjoyed Dear Committee Members, then I’m sure you’ll enjoy this one, too. Amusing, endearing, and packed with plenty of intelligent observations about academia, people and relationships. A must read of the year. Highly recommended.

Julie Schumacher’s The Shakespeare Requirement is due to be published by Doubleday in August 2018.