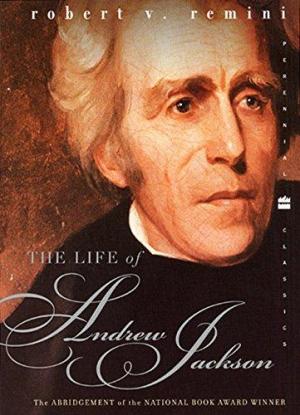 A very useful, infuriating single-volume biography of the seventh president

Robert V. Remini’s prize-winning, three-volume biography Life of Andrew Jackson won the National Book Award on its completion in 1984 and is recognized as one of the greatest lives of a U.S. President. In this meticulously crafted single-volume abridgment, Remini captures the essence of the life and career of the seventh president of the United States. As president, from 1829-1837, Jackson was a significant force in the nations’s expansion, the growth of presidential power, and the transition from republicanism to democracy.

Jackson is a highly controversial figure who is undergoing historical reconsideration today. He is known as spurring the emergence of the modern American political division of Republican and Democractic parties, for the infamous Indian removal on the Trail of Tears, and for his brave victory against the British as Major General at the Battle of New Orleans.

Never an apologist, Remini portrays Jackson as a foreceful, sometimes tragic, hero — a man whose strength and flaws were larger than life, a president whose conviction provided the nation with one of the most influential, colorful, and controversial administrations in our history.

Robert V. Remini is considered one of the preeminent scholars of Andrew Jackson and his times. His three-volume biography of Jackson won the National Book Award and many think of it as one of the best, substantial biographies of any president. In The Life of Andrew Jackson, he has written a comprehensive, (relatively) briskly paced biography. However, the book suffers from one major flaw that coloured almost everything Remini included within.

I came to this book somewhat indifferent about Andrew Jackson. I knew some of his history — the impact his election had on popular participation in American electoral politics; his racism and its evidence in his policies towards, especially the indigenous population. I finished this book quite antagonistic towards Jackson, which is quite surprising. Surprising because Remini is so clearly in awe of his subject. Remini’s rose-tinted glasses distort many of his conclusions and opinions of Jackson. While I don’t fault the author on the historical content, his interpretations of Jackson’s character and value(s) come across as delusional.

I won’t work through the whole book, picking apart every instance of Remini’s obsequious adoration of and excuse-making for Jackson. Nor will I address everything covered by the book — if that’s what you’re after, then I would recommend actually reading it yourself.

It is, however, worth picking up on a couple of issues I had with the biography. Early on in the book, Remini describes Jackson as “basically… a conservative and deliberate man” (12), and “Despite his temper and hotheadedness, he was always a cautious man” (15). This may well refer to someone who lived at that time, but not Jackson. Remini litters his biography with evidence that this impression is wholly incorrect. Jackson was calculating, certainly, but he was enslaved by his emotions. At one time, after a particularly critical speech by Henry Clay, Jackson packed up his pistols and made his way to DC, fully intending on killing Clay in a duel. Only because he was met with an adoring crowd was his anger cooled. Remini describes many instances in Jackson’s pre-presidential life and career in which he lashed out against others — most often physically. His duel with Dickinson was considered by many of his contemporaries a “brutal, cold-blooded killing”, which left him with “a reputation as a violent and vengeful man” (53-4). His courtship of his future wife, Rachel, can charitably be described as psychopathic — he threatened her husband, scaring him so much that he fled the state. [Perhaps the only redeeming quality of Jackson’s character is that he was utterly devoted to his wife.]

At other instances, Remini mentions Jackson’s “savage hatreds and readiness to violence” (68); his life-long grudges against those he believed to have wronged him, a list that is nearly endless — Jefferson, Madison, Adams, Clay (oh, how he hated Clay…) to name but a few. When it came to the treatment of his slaves (of which he owned many), “his behavior on occasion can only be described as barbaric” (51-2).

Remini takes readers through Jackson’s early legal career, his rise from small-town lawyer to Tennessee Superior Court Judge (a position in which he seems to have been quite successful and respected). We also learn of Jackson’s presumptuous drive for military appointment and respect. When first he ran for Major General of the Tennessee Militia came at a time when he had zero military experience, running against a war hero. After the Governor Sevier handed the election to his own man, Jackson formed a life-long hatred of Sevier — a hatred that simmer until it boiled over into one of the most farcical example of a botched duel I’ve ever read.

Jackson’s eventual military career is one characterized by ruthlessness and blind luck. By Remini’s own descriptions, Jackson was rash, impetuous, and not infrequently was forced to extricate himself and his troops out of situations for which he was responsible. Rather than identifying these instances as reckless, Remini is in awe of his ability to address his mistakes — something Jackson did by transferring blame to others. In one contradictory statement, Remini writes that, Jackson “had kept a force in the field despite massive desertions” (80). Remini ably handles the difficulties Jackson caused for the Monroe administration after he invaded Florida, as well as Jackson’s ruthless conduct of the Seminole War (not to mention the apparently “genius” way Jackson screwed his allies after its conclusion). One area in which Remini comes closest to breaking with his subject is in Jackson’s treatment of the “Indians” — the land theft, the Trail of Tears, and his lifelong mission to purge Tennessee and later more of the United States of the indigenous presence.

Jackson’s presidency, which is seen as a moment of the birth of modern democracy certainly saw a dramatic increase in popular participation from the voting-eligible population. Martin Van Buren (who would succeed him to the presidency) helped create the first “modern” political campaign, one that involved the mass-deployment of allies and grassroots campaigning. What Remini doesn’t appropriately do is explain Jackson’s incredible popularity outside of the West and South. True, the Battle of New Orleans occurred just before news of the Treaty of Ghent arrived in the United States, which (strangely) led many Americans to see the former as a cause of the latter.

The author doesn’t provide much information and explanation of the forces that were involved in the myth-making that preceded Jackson’s unsuccessful 1824 run for the presidency, and continued well after his presidency ended in 1837. J.M. Opal does this to some extent in his very good recent book, Avenging the People (Oxford University Press, 2017). Later this year, David S. and Jeanne T. Heidler will address this in their upcoming book, The Rise of Andrew Jackson (Basic Books, 2018).

As I’ve discovered since reading The Life of Andrew Jackson, if you’ve read one biography of Jackson, you’ve pretty much read them all. Jackson was not the prolific writer that many of his peers were (in his mind, inferiors all), and many of what he did write was lost in a fire at the Hermitage (his plantation). As a result, most of the books I’ve read about Jackson end up feeling quite repetitive. If you only wanted to read one book on Andrew Jackson, and were looking for a mostly positive portrait of the seventh president, then Remini’s single-volume book might suit.

Because I’m currently working on something for which Jackson plays a key part, I will be reading more about the seventh president in the very near future. Next on the docket is Jon Meacham’s Pulitzer Prize-winning American Lion, for which I have higher hopes.

Robert V. Remini’s The Life of Andrew Jackson is published by Harper Perennial in the US and the UK.