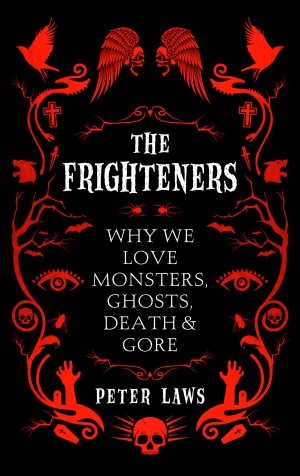 I hadn’t heard of Peter Laws‘s new book before the publicist reached out to me. It is the story of a minister’s investigation into our fascination with the macabre, scary and horrific. I thought it sounded quite interesting, and so today Icon Books have allowed me to share with you an excerpt from The Frighteners. But first, here’s the synopsis:

The Frighteners follows the quest of Peter Laws, a Baptist minister with a penchant for the macabre, to understand why so many people love things that are spooky, morbid and downright repellent. He meets vampires, hunts werewolves in Hull, talks to a man who has slept on a mortuary slab to help him deal with a diagnosis, and is chased by a chainsaw-wielding maniac through a farmhouse full of hanging bodies.

Staring into the darkness of a Transylvanian night, he asks: What is it that makes millions of people seek to be disgusted and freaked out? And, in a world that worships rationality and points an accusing finger at violent video games and gruesome films, can an interest in horror culture actually give us safe ways to confront our mortality? Might it even have power to re-enchant our jaded world?

Grab your crucifixes, pack the silver bullets, and join the Sinister Minister on his romp into our morbid curiosities.

Read on for an excerpt from the chapter “Sisters”…

I’ve brought my wife and two small kids to see some dead bodies today. A lot of dead bodies, actually. We’re about to see 3,700 corpses resting in the cool air of an underground crypt. We’re in Rome, and we’re rather glad of the drop in temperature. Up above us, tourists are melting into the pavement, but down here the sweat on our backs is turning refreshingly cold.

This is the Capuchin Crypt, and it sits beneath the church and friary on Via Veneto. It’s under the care of a Catholic order of friars, the Capuchins, whose brown-hooded robes and pale heads are said to have inspired the cappuccino coffee. The Capuchins buried their dead brothers on this site from 1631–1870, having started the practice at their previous building near the Trevi Fountain. Which, coincidentally, is where we’ve just come from. We strolled up the streets taking selfies and buying fidget-spinners. When the brothers followed that same route, Father Michael of Bergamo brought 300 cartloads of dead friars with him. In the coming centuries, any monk who died would be added, so that the number of brothers in the crypt reached the thousands.

Having that many skeletons in such a confined space meant they had to develop a grave rota system. When a new man died, they would dig up the longest buried skeleton to make room. It was during the mid-1700s that the idea came to arrange the old bones in a new way. It saved on space, but it also became a vivid opportunity for holy funerary art. The result is this astonishing corridor of chambers, each with an in-your-face name like ‘The Crypt of the Pelvises’, ‘The Crypt of the Leg Bones and Thigh Bones’, or ‘The Crypt of the Skulls’.

We creak down two steep steps and find ourselves at the start of the 30-foot corridor which houses all the bones. I notice something straight off: the sound has changed. The buzz of chatter from us and the other tourists – the requests for ice-cream and toilet breaks, the shoving and giggling – that’s all vanished now. It has mostly turned to silence, with the occasional hiss of a whisper. There are six chambers off this corridor which we can’t yet see. I’ve read that five of them are filled with skeletons.

We all step forward.

My six-year-old son slips his hand into mine, ‘Daddy,’ he gasps. ‘Look at that.’

We’re staring, open-mouthed, at the first, heavily decorated chamber, where four monks are ready to greet us.

They’ve been dead for centuries. The folds in their brown robes have gradually pooled with dust. I guess that’s what happens to people when they never, ever move. Two look like classic, but dirty, skeletons, but the other two have faces covered by stretched, mummified skin. They’re lying back, holding crosses. I spot a rosary resting under a set of skinny fingers. They’re creepily long, these fingers. It makes me think of the Grinch wriggling out a wave. I can see where the fingernails used to be. The other two monks are standing at the back, pinned to the wall inside little archways. They’re bent forward so it looks like they’re either praying, or about to leap off the wall at us.

My daughter moves closer to the low, wrought-iron railings that stop us getting too close. ‘What’s all the stuff on the walls …’ She trails off when she realises for herself.

The skeletons aren’t the only human remains in here. The walls are filled with shapes – spirals and stars – all made up of bones. Large arches and floral motifs are actually ribs, vertebrae and knee-caps. Above us, the chandeliers are made of what look like femurs and arm bones. The back wall has a whopping pile of pelvises, meticulously stacked to support the skeletons of three children, who lie on top.

An American tour guide brings his group up behind us and we hang around to eavesdrop. He says the skeletons of these kids are to symbolise that death can come at any age. And, as an added kicker, I see two hourglasses pinned next to them, also made of bones. The hourglasses each have a set of wings, fashioned from the shoulder blades of the dead monks. The joke, if it is a joke, is that time flies.

I notice that my wife is looking up. I follow her gaze and see another skeleton of a child, pinned to the ceiling with nails and wire. The guide says this is thought to be the remains of an infant princess called Anna Barberini. Anna holds scales in her left hand. I’d say it’s two skull caps hanging by three finger bones. And in her right hand is a scythe, the symbol of death.

As if we needed any more hints, I spot a sign with this message:

What you are now, we once were; what we are now, you shall be.

Sheesh. These monks are an absolute riot. Yet as I pause to think about what’s going on here, a faint smile grows. I hear the dead friars whispering, through the endless rows of tightly packed jawbones that arch above my head: Hey, you. Yeah, you with the kids and the slack-jaw. It’s okay to be fascinated by our remains. To feel a thrill down here, because sometimes spooky, even disturbing, places can be holy ground.

It’s starting to stir a deep theme in me, this, and it’s related to something I haven’t really looked at in this journey yet. It’s about the question I get asked the most. See, people tend to ask me: How can you like morbid, scary things? But more often they phrase it like this: How can you be a Christian and like that stuff? That makes zero sense to me. Here with the friars, I feel like they’re saying: We hear you, bro. We get it, because we were Christians and students of the macabre too.

The Frighteners is due to be published by Icon Books on March 22nd, 2018.